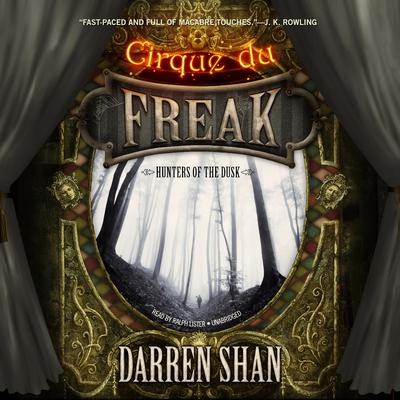 Hunters of the Dusk

After six years of living in Vampire Mountain, Darren Shan, the Vampire Prince, leaves on a life or death mission. As part of an elite force, Darren searches the world for the Vampaneze Lord, who is determined to lead his forces to victory against the vampires. But the road ahead is long and dangerous—and lined with the bodies of the damned.

Hunters of the Dusk is the start of an action-packed, three-part Darren Shan adventure, a tale of quests, friendship, treachery, despair, and bloodshed.

“Overflowing with guts, gore, and unguessable plot twists, this series is a stylishly written alternative to the now jaded Point Horror.” —Times Educational Supplement (UK)
“Chock-full of the suspense that’s made Shan’s Cirque du Freak series a smash hit, the seventh installment revs up when Mr. Tiny visits Vampire Mountain with surprising revelations about the Vampaneze Lord and some new, unexpected troops he’s managed to create…Hunters of the Dusk is a darkly thrilling, crucial read in the series.” —Barnes & Noble, editorial review
“This installment is a must-read for fans of the series. They will not be able to put it down. The prologue at the beginning of the book is great for providing the background of Cirque du Freak for those who are unfamiliar with the series. The story itself is enthralling and will create instant Darren Shan fans of any new readers. As with all books in the series, the cliffhanger ending will leave readers desperate for the next chapter of the Darren Shan saga.” —VOYA
“Well paced and smoothly flowing, Darren Shan has crafted another finely wrought effort in the bestselling Saga of Darren Shan.” —Children’s Literature
“Action-packed…Simple language, a fast pace, humor, and a suspenseful plot are the hallmarks of this seventh entry in the series.” —School Library Journal