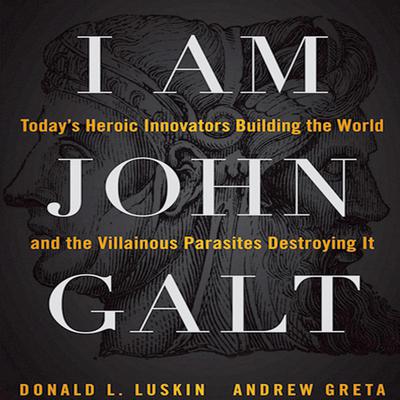 I Am John Galt: Today's Heroic Innovators Building the World and the Villainous Parasites Destroying It

By Donald Luskin  and Andrew Greta
Read by Alex Hyde-White

John Galt, a fictional character from the hugely bestselling novel, Atlas Shrugged, has come to embody the individualist capitalist who acts in his own self interest and in doing so lifts other ships around him. "Who is John Galt?" may well be the single best known line from all of Ayn Rand's works. So who is John Galt? He is found today, over 50 years after his iconic appearance (and famous speech) in Atlas Shrugged, in CEOs, journalists, sports figures, and actors who have led their lives according to Galt's (e.g., Rand's) philosophy and in so doing they have achieved phenomenal success, not only for themselves but for those around them. Whole Foods is considered one of the best companies to work for and a pleasant place to shop with great products, BB&T is one of the few big banks actually lending during the economic crisis and refusing to take TARP money, Penn & Teller have created a franchise out of their free market views, and Mark Cuban has built a huge fortune and franchise. Now, these success stories are gathered in one place with keen insight and analysis from the popular Donald Luskin, well known market commentator, and experienced journalist Andrew Greta, along with analysis of today's villains, thwarting the efforts of these Randian heroes including power hungry pseudo intellectuals, hapless politicians, and scheming bureaucrats who thwart the heroic. Sure to be of interest to Ayn Rand fans everywhere, and also to those seeking a way to succeed in today's turbulent and confusing times.