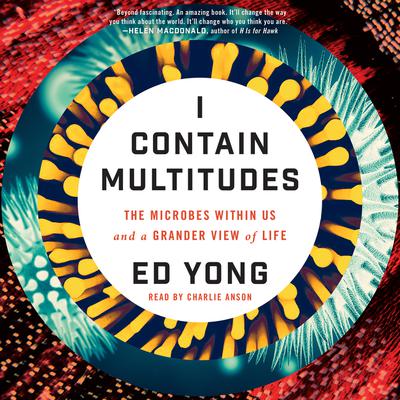 I Contain Multitudes: The Microbes Within Us and a Grander View of Life

Shortlisted for the Royal Society Prize for Science Books

A London Guardian Best Book of the Year

An Economist Best Book of the Year

A Minneapolis Star-Tribune Pick of the Year's Best Books

Smithsonian Best Books about Science of 2016

A Mother Jones Notable Read of 2016

Chicago Public Library Best of the Best Books of 2016

Minnesota Star-Tribune Best of the Year

A Kirkus Best Book of the Year

A PW Best Book of the Year

Guardian Best of the Year

Times (London) Best of the Year

Joining the ranks of popular science classics like The Botany of Desire and The Selfish Gene, a groundbreaking, wondrously informative, and vastly entertaining examination of the most significant revolution in biology since Darwin—a “microbe’s-eye view” of the world that reveals a marvelous, radically reconceived picture of life on earth.

Every animal, whether human, squid, or wasp, is home to millions of bacteria and other microbes. Pulitzer Prize-winning author Ed Yong, whose humor is as evident as his erudition, prompts us to look at ourselves and our animal companions in a new light—less as individuals and more as the interconnected, interdependent multitudes we assuredly are.

The microbes in our bodies are part of our immune systems and protect us from disease. In the deep oceans, mysterious creatures without mouths or guts depend on microbes for all their energy. Bacteria provide squid with invisibility cloaks, help beetles to bring down forests, and allow worms to cause diseases that afflict millions of people.

Many people think of microbes as germs to be eradicated, but those that live with us—the microbiome—build our bodies, protect our health, shape our identities, and grant us incredible abilities. In this astonishing book, Ed Yong takes us on a grand tour through our microbial partners, and introduces us to the scientists on the front lines of discovery. It will change both our view of nature and our sense of where we belong in it.

Ed Yong is a Pulitzer Prize–winning science writer on the staff of The Atlantic, where he also won the George Polk Award for science reporting, among other honors. His first book, I Contain Multitudes, was a New York Times bestseller and won numerous awards. His work has appeared in the New Yorker, National Geographic, Wired, the New York Times, Scientific American, and more.