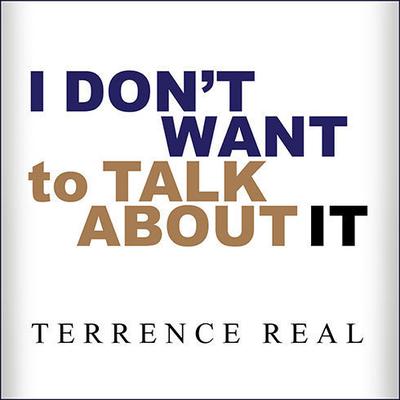 I Don't Want to Talk About It: Overcoming the Secret Legacy of Male Depression

Each year, millions of men and women fall prey to depression. While the disorder has been called "psychiatry's most treatable condition," less than one in five get help. In recent years, the silence surrounding depression in women has begun to lift, but only now, with this powerful groundbreaking work, does psychotherapist Terrence Real expose a virtual epidemic of the disorder in men. Twenty years of experience treating men and their families has convinced Real that there are two forms of depression: "overt" and "covert." Feeling the stigma of depression's "unmanliness," many men hide their condition not only from family and friends but even from themselves. Attempts to escape depression fuel many of the problems we think of as typically male—difficulty with intimacy, workaholism, alcoholism, abusive behavior, and rage. By directing their pain outward, depressed men hurt the people they love, and, most tragically, pass their condition on to their children. A master storyteller, Real mixes penetrating analysis with poignant, compelling tales of the men and women whom he treats. He writes with passion and searing clarity about his own experiences with depression, as the son of a depressed, violent father, and the father of two young sons. Peggy Papp of the Ackerman Family Institute calls this book "a pathway out of the darkness." Real teaches us how men can unearth their pain, heal themselves, restore relationships, and break the legacy of abuse. I Don't Want to Talk About It offers great wisdom, hope, and practical guidance to men and their families. This is one of the most important and straightforward books ever written about men.

Terrence Real is the bestselling author of I Dont Want to Talk about It: Overcoming the Secret Legacy of Male Depression and How Can I Get through to You?: Reconnecting Men and Women. He has been a practicing family therapist for more than twenty years, lecturing and giving workshops across the country. In March, 2002, he founded the Relational Empowerment Institute. His work has been featured on NBC Nightly News, Today, Good Morning America, and Oprah, as well as in the New York Times, Psychology Today, Esquire, and numerous academic publications. He lives with his wife and two sons in Newton, Massachusetts.