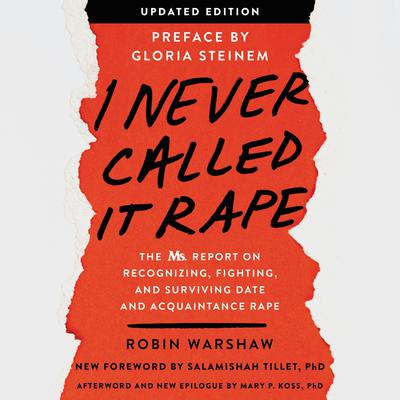 I Never Called It Rape - Updated Edition: The Ms. Report on Recognizing, Fighting, and Surviving Date and Acquaintance Rape

“Essential. . . . It is nonpolemical, lucid, and speaks eloquently not only to the victims of acquaintance rape but to all those caught in its net.”— Philadelphia Inquirer

With the advent of the #MeToo and Time’s Up movements, and almost daily new reports about rape, both on and off campuses, Robin Warshaw’s I Never Called It Rape is even more relevant today than when it was first published in 1988. The sad truth is that statistics on date rape have not changed in more than thirty years. That our culture enables rape is not just shown by the numbers: the outbreak of complaints against alleged rapists from Bill Cosby and Harvey Weinstein to Matt Lauer and President Donald Trump has further amplified this horrifying reality.

With more than 80,000 copies sold to date, I Never Called It Rape serves as a guide to understanding rape as a cultural phenomenon—providing women and men with strategies to address our rape endemic. It gives survivors the context and resources to help them heal from their experiences, and pulls the wool from all our eyes regarding the pervasiveness of rape and sexual assault in our society.

“Essential…It is nonpolemical, lucid, and speaks eloquently not only to the victims of acquaintance rape but to all those caught in its net.” —Philadelphia Inquirer

Robin Warshaw is a writer and editor. She has written for the New York Times, Philadelphia Inquirer, Ms., Women’s Day, and many more publications, and has won national awards for her journalism. In 1988, she published I Never Called It Rape, the groundbreaking book on the prevalence of rape in American society, and contributed a new introduction to it in 1994.