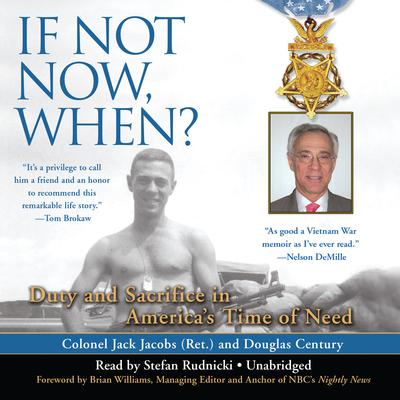 If Not Now, When?: Duty and Sacrifice in America’s Time of Need

Winner of the 2010 Colby Award

Army First Lieutenant Jack Jacobs was serving as an advisor to the South Vietnamese when he and his men came under devastating attack. Severely wounded, Jacobs took command and withdrew the unit, returning again and again to the site of the attack to rescue more men, saving the lives of a US advisor and thirteen Allied soldiers. Colonel Jacobs received the nation’s highest military award, the Medal of Honor.

Here, with candor, humor, and quiet modesty, Jack Jacobs tells his stirring story of heroism, honor, and the personal code by which he has lived his life. He expounds with blunt honesty and insight his views on our contemporary world and the nature and necessity of sacrifice.

“Offers a mix of no-holds-barred personal history and pointed observations about the demands (or lack thereof) the U.S. makes on its citizens today. Never self-indulgent or preachy, Jacobs takes an honest—and often brutally funny—look back at his own life and forward to the future of the military and the nation.” —Parade magazine

Jack Jacobs retired from the military as a full colonel in 1987. Today, he is widely regarded as one of the world’s most perceptive and outspoken military analysts. He lives in Millington, New Jersey.

Douglas Century is a contributor to the New York Times bestseller by William Queen Under and Alone: The True Story of the Undercover Agent Who Infiltrated America’s Most Violent Outlaw Motorcycle Gang and coauthor with Rick Cowan of Takedown: The Fall of the Last Mafia Empire. He is the author of two critically acclaimed books, Barney Ross: The Life of a Jewish Fighter and Street Kingdom: Five Years inside the Franklin Avenue Posse. He has coauthored several highly acclaimed memoirs, including If Not Now, When?; Brotherhood of Warriors; and Ice: A Memoir of Gangster Life and Redemption from South Central to Hollywood. He has written for the New York Times, the Guardian, Rolling Stone, the Village Voice, Newsday, and other publications and is a contributing editor at Tablet magazine.