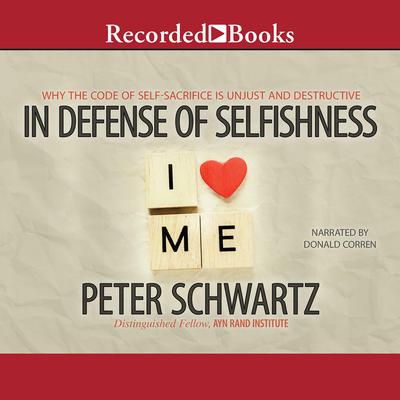 In Defense of Selfishness: Why the Code of Self-Sacrifice Is Unjust and Destructive

From childhood, we're taught one central, non-controversial idea about morality: self-sacrifice is a virtue. It is universally accepted that serving the needs of others, rather than our own, is the essence of morality. To be ethical--it is believed--is to be altruistic. Questioning this belief is regarded as tantamount to questioning the self-evident. Here, Peter Schwartz questions it. In Defense of Selfishness refutes widespread misconceptions about the meaning of selfishness and of altruism. Basing his arguments on Ayn Rand's ethics of rational self-interest, Schwartz demonstrates that genuine selfishness is not exemplified by the brutal plundering of an Attila the Hun or the conniving duplicity of a Bernard Madoff. To the contrary, such people are acting against their actual, long-range interests. The truly selfish individual is committed to moral principles and lives an honest, productive, self-respecting life. He does not feed parasitically off other people. Instead, he renounces the unearned, and deals with others--in both the material and spiritual realms--by offering value for value, to mutual benefit. The selfish individual, Schwartz maintains, lives by reason, not force. He lives by production and trade, not by theft and fraud. He disavows the mindlessness of the do-whatever-you-feel-like emotionalist, and upholds rationality as his primary virtue. He takes pride in his achievements, and does not sacrifice himself to others--nor does he sacrifice others to himself. According to the code of altruism, however, you must embrace self-sacrifice. You must subordinate yourself to others. Altruism calls, not for cooperation and benevolence, but for servitude. It demands that you surrender your interests to the needs of others, that you regard serving others as the moral justification of your existence, that you be willing to suffer so that a non-you might benefit. To this, Schwartz asks simply: Why? Why should the fact that you have achieved any success make you indebted to those who haven't? Why does the fact that someone needs your money create a moral entitlement to it, while the fact that you've earned it, doesn't? Using vivid, real-life examples, In Defense of Selfishness illustrates the iniquity of requiring one man to serve the needs of another. This provocative book challenges readers to re-examine the standard by which they decide what is morally right or wrong.

“This thoughtful and well-reasoned essay will, for sure, evoke many spirited arguments on the altruism versus-selfishness debate.” —Booklist
“It is taken as an axiom by most people that altruism is moral and self-interest is immoral. In a brilliant analysis, Peter Schwartz turns this view on its head. By explaining what altruism and self-interest really mean, he shows that altruism (self-sacrifice), far from being benevolent, is profoundly antilife, and that self-interest, based on reason, is unequivocally pro-life. There is no doubt that America’s future depends more on this one, fundamental issue than on any other. —Dr. Edwin Locke, emeritus professor of leadership and motivation at the R. H. Smith School of Business, University of Maryland
“Are you selfish? You should be, and Peter Schwartz knows why. In the breezy but passionate In Defense of Selfishness, Schwartz validates rational egoism as the only moral code by which humans can live and succeed. It’s not bad policies that are destroying the world, but bad philosophic ideas. From charity to religion to government to romantic love, Schwartz systematically incriminates the altruist ethics that likely lies behind most decisions you make, and presents selfishness-yes, selfishness-as the moral ideal. This radical book could change the world.” —Jonathan Hoenig, Fox News Contributor

Peter Schwartz is a writer and journalist who follows the Objectivist philosophy of Ayn Rand. He was the original editor for the Intellectual Activist and has contributed to books that reprint articles by Rand and other Objectivist writers, such as The Voice of Reason and Return of the Primitive: The Anti-Industrial Revolution. He is also the author of The Foreign Policy of Self-Interest: A Moral Ideal for America and The Battle for Laissez-Faire Capitalism.