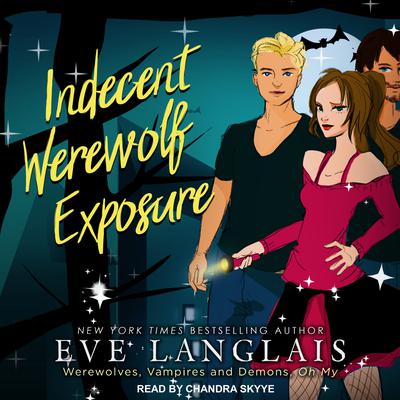 The Werewolves, Vampires and Demons, Oh My Series: Book 1

It's TGIF, which means in a few hours I'll be tossing back a few martinis with my best friend, Brenda. First, though, I need to deal with my crazy new client, a werewolf who thinks it's okay to pee on his neighbor's flowers because she's a witch. What a shame he's obviously got a few screws loose, because bad-boy Pete is seriously hot.

His insanity must be contagious, because I did the craziest thing later that night. I let my nemesis in the courtroom, assistant DA Anthony Vanderson, seduce me. In my defense, he's got mesmerizing blue eyes—and a seriously sexy bod.

With my sexual itch scratched, I should be able to go back to my awesome life as a single gal.

I guess a girl can't always get what she wants—but boy, do my two suitors know how to give me what I need.

Eve Langlais is the author of the Freakn’ Shifters series, the Princess of Hell series, and the Alien Abduction series. She makes her home in Canada with her husband and three children.