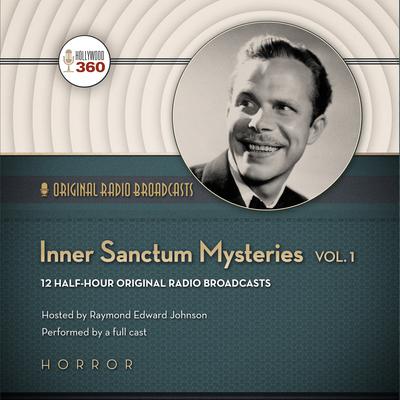 Taking its name from a popular series of mystery novels, Inner Sanctum Mysteries debuted over NBC's Blue Network in January 1941. It featured one of the most memorable and atmospheric openings in radio history: an organist hit a dissonant chord, a doorknob turned, and the famous "creaking door" slowly began to open. Every week, Inner Sanctum Mysteries told stories of ghosts, murderers, and lunatics. Produced in New York, the cast usually consisted of veteran radio actors, with occasional guest appearances by such Hollywood stars Boris Karloff, Peter Lorre, and Claude Rains. What made Inner Sanctum Mysteries unique among radio horror shows was its host, a slightly sinister sounding fellow originally known as "Raymond." The host had a droll sense of humor and an appetite for ghoulish puns, and his influence can be seen among horror hosts everywhere, from the Crypt-Keeper to Elvira. Raymond Edward Johnson was the show's host until 1945; Paul McGrath took over as host until the show left the air in 1952. Producer Hiram Brown would utilize the creaking door again in the 1970s, when he produced and directed The CBS Radio Mystery Theater.

The Voice on the Wire, starring Lesley Woods

Trapped on an island, a voice on the telephone warns a woman that she has only four hours to live. Originally aired November 29, 1944.

Two men driving across the desert pick up three hitchhikers who turn out to be escaped Nazi prisoners. Originally aired January 9, 1945.

Four dead cats and a man are found in an apartment—all with their throats slit or their heads cut off. Originally aired January 23, 1945

A deep-sea diver meets some old friends down in a shipwreck. Originally aired February 6, 1945.

No Coffin for the Dead, starring Les Tremayne

Who killed Peter Frame? The killer may be an insane person who is unable to walk. Originally aired February 20, 1945.

The discovery of a necklace around a skeleton is the key to a forty-year-old murder. Originally aired April 10, 1945.

A murderer about to be hanged is rescued by a woman with strange powers. Originally aired May 15, 1945.

An inept couple murders for profit and then flees when the net closes in on them. Originally aired May 22, 1945.

Death across the Board, starring Raymond Massey

A poker game has murder as the stakes. Originally aired August 28, 1945.

Who killed Claudia's first husband … and her second … and the man who loved her? Originally aired September 4, 1945.