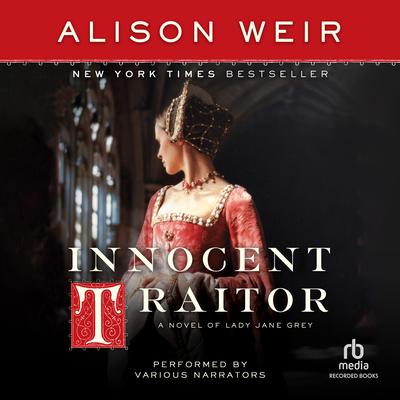 I am now a condemned traitor . . . I am to die when I have hardly begun to live. Historical expertise marries page-turning fiction in Alison Weir's enthralling debut novel, breathing new life into one of the most significant and tumultuous periods of the English monarchy. It is the story of Lady Jane Grey-"the Nine Days' Queen"-a fifteen-year-old girl who unwittingly finds herself at the center of the religious and civil unrest that nearly toppled the fabled House of Tudor during the sixteenth century. The child of a scheming father and a ruthless mother, for whom she is merely a pawn in a dynastic game with the highest stakes, Jane Grey was born during the harrowingly turbulent period between Anne Boleyn's beheading and the demise of Jane's infamous great-uncle, King Henry VIII. With the premature passing of Jane's adolescent cousin, and Henry's successor, King Edward VI, comes a struggle for supremacy fueled by political machinations and lethal religious fervor. Unabashedly honest and exceptionally intelligent, Jane possesses a sound strength of character beyond her years that equips her to weather the vicious storm. And though she has no ambitions to rule, preferring to immerse herself in books and religious studies, she is forced to accept the crown, and by so doing sets off a firestorm of intrigue, betrayal, and tragedy. Alison Weir uses her unmatched skills as a historian to enliven the many dynamic characters of this majestic drama. Along with Lady Jane Grey, Weir vividly renders her devious parents; her much-loved nanny; the benevolent Queen Katherine Parr; Jane's ambitious cousins; the Catholic "Bloody" Mary, who will stop at nothing to seize the throne; and the protestant and future queen Elizabeth. Readers venture inside royal drawing rooms and bedchambers to witness the power-grabbing that swirls around Lady Jane Grey from the day of her birth to her unbearably poignant death. Innocent Traitor paints a complete and compelling portrait of this captivating young woman, a faithful servant of God whose short reign and brief life would make her a legend.

“A sensitive and fast-paced tale…Weir conveys the age’s political intrigues, religious fanaticism, and sexism.” —USA Today
“You can’t resist Jane—so young, so brilliant, so cruelly used and sacrificed. In the nine days’ queen, Weird has found a fascinating and deeply sympathetic figure through which to examine one of the strangest crises of British history.” —Washington Post
“Weir proves herself deft as ever describing Tudor food, manners, clothing, pastimes (including hunting and jousting), and marital politics.” —Publishers Weekly
“Alison Weir writes a splendid historical fiction…Multiple talented narrators are well chosen for voices and viewpoints that collaborate to tell the story. Davina Porter’s cold tones portray Jane’s shrewish mother, Frances Brandon, who can’t forgive her daughter for being born female. The regal-accented Gerard Doyle portrays self-interested John Dudley, who uses Jane as a political pawn, and Bianca Amato plays Queen Mary, who responds coldly to this political threat but melts later in compassion. In contrast are Jenny Sterlin’s kindly nurse, Mrs. Ellen, and Stina Nielsen, who shows us Jane’s development from dutiful child to contemplative girl at court and finally the 16-year-old young woman who faces execution with grace.” —AudioFile
“Complex yet completely absorbing…Weir finds Jane an intelligent individual, a thinker in her own right; but, tragically, given the times and the power available to the ‘grown-ups’ around her, she ultimately could not resist the political currents swirling over her. A brilliantly vivid and psychologically astute novel.” —Booklist (starred review)
“Weir keeps a complicated story untangled with the deft use of multiple first-person points of view. The recording enhances the technique by using varied clear-voiced narrators. Highly recommended.” —Library Journal

Alison Weir is the New York Times bestselling author of the novels Innocent Traitor and The Lady Elizabeth and several historical biographies, including Mistress of the Monarchy and The Six Wives of Henry VIII.