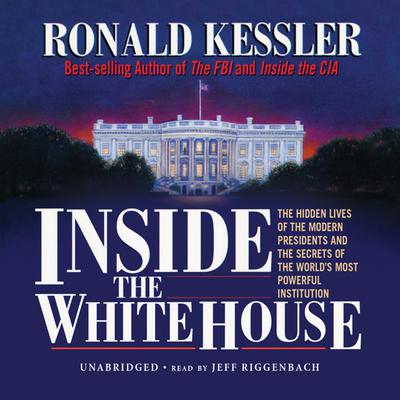 Inside the White House

“If the general public knew what was going on inside the White House, they would scream.” So states one Secret Service agent, just a small link in the chain of security that has guarded the public image of the presidency and the men who define it—until now.

With unprecedented access to Secret Service agents, domestic servants, Air Force One stewards, and military aides, journalist Ronald Kessler has gone behind the scenes to uncover the inside story of the White House. From the hidden lives of the last seven presidents and first families to the intricate inner workings of this all-powerful institution, Kessler peels away the White House facade to reveal the fascinating and often scandalous reality behind the stately illusion. Exposing presidential misconduct, blunders, and cover-ups, this fascinating examination ensures that Americans will never view their chief executives the same way again.

“Kessler provides an impressive amount of dirt on presidents from Johnson to Clinton. The details are lurid.” —Boston Globe
“Kessler raises…important issues in this recommended exposé, which will find a large audience in public libraries.” —Library Journal
“Because this report seems accurate and few of Kessler’s sources hide behind anonymity, it should garner high…interest.” —Booklist
“Riggenbach paces himself well and never becomes boring as each president gets roasted in some fashion.” —Kliatt

Ronald Kessler is the New York Times bestselling author of The FBI, Inside the CIA, Moscow Station, Escape from the CIA, Spy vs. Spy, The Spy in the Russian Club, and The Richest Man in the World. He is an award-winning former correspondent for the Wall Street Journal and the Washington Post, and his articles appear in leading periodicals. Mr. Kessler lives in Potomac, Maryland.