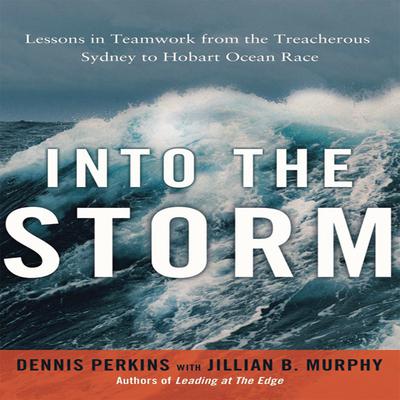 Into the Storm: Lessons in Teamwork from the Treacherous Sydney to Hobart Ocean Race

By Jillian B. Murphy and Dennis N.T. Perkins
Read by Walter Dixon

The iconic Sydney to Hobart Race, a 723-mile deepwater challenge—often called the “Everest” of offshore ocean racing—is considered one of the toughest in the world. Unpredictable weather and seas make each race demanding, but in 1998, an unexpected “weather bomb” hit the fleet, creating 80-foot waves and 100-mile-per-hour winds. Many bigger, better-equipped boats tried to maneuver around the storm, but the crew of the AFR Midnight Rambler chose to head directly into its path. After battling mountainous waves and hurricane-force winds in the Bass Strait, the tiny 35-foot boat arrived safely in Hobart, 3 days and 16 hours later—winning the coveted Tattersall’s Cup. What were the factors underlying this incredible achievement? Into the Storm recounts the story of the Ramblers’ stunning victory, and the teamwork that made it possible—revealing powerful lessons for success in today’s demanding business environment. Illustrated with examples from the story and compelling case studies, this riveting adventure story provides effective methods you can use to: Cut through the noise of the wind and waves. Inventive methods of communication enabled the Ramblers to stay cohesive in spite of deafening wind and waves. What can your team do when flooded by e-mails, voice mails, conflicting demands, and other distractions? Remove all excuses for failure. One of the most distinctive characteristics of the Rambler crew was their focus on careful preparation. The crew spent hours practicing maneuvers so they could do them in the toughest conditions—in rough seas, and at night. Winning teams devote extensive time and energy to preparation, leaving nothing to chance. Deal with the things that slow you down. Conflict is a natural occurrence in any group, but it can be productive when managed appropriately. The Ramblers’ tale of survival reveals techniques for dealing with the stress and tension that impair team performance. The Ramblers’ success resulted from an extraordinary blend of collaboration, trust, planning, and execution. Into the Storm equips you with the tools to overcome daunting odds and win your team trophy.

Dennis N.T. Perkins, PhD, is president of the Syncretics Group, a consultancy that specializes in leadership. He has written extensively on leadership and organizational effectiveness. He is books include Leading at the Edge: Leadership Lessons from the Extraordinary Saga of Shackleton’s Antarctic Expedition and Racing through the Store: Building Exceptional Teams in Extraordinary Times.