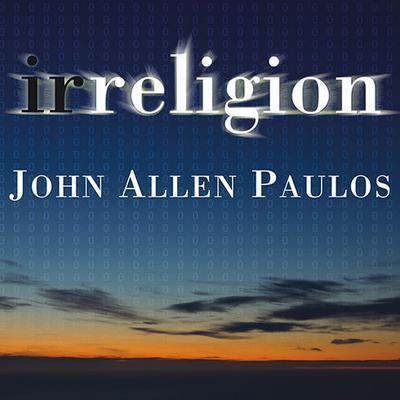 Irreligion: A Mathematician Explains Why the Arguments for God Just Don't Add Up

A lifelong unbeliever finds no reason to change his mind. Are there any logical reasons to believe in God? Mathematician and bestselling author John Allen Paulos thinks not. In Irreligion he presents the case for his own worldview, organizing his book into twelve chapters that refute the twelve arguments most often put forward for believing in God's existence. The latter arguments, Paulos relates in his characteristically lighthearted style, "range from what might be called golden oldies to those with a more contemporary beat. On the playlist are the first-cause argument, the argument from design, the ontological argument, arguments from faith and biblical codes, the argument from the anthropic principle, the moral universality argument, and others." Interspersed among his twelve counterarguments are remarks on a variety of irreligious themes, ranging from the nature of miracles and creationist probability to cognitive illusions and prudential wagers. Special attention is paid to topics, arguments, and questions that spring from his incredulity "not only about religion but also about others' credulity."

Paulos is truly funny.... This little book...provides both atheists and religious apologists some digestible food for thought. —Publishers Weekly

John Allen Paulos is an author, popular public speaker, and monthly columnist for ABCNews.com and the Guardian (London). A professor of math at Temple University in Philadelphia, he earned his PhD in the subject from the University of Wisconsin. His books include the New York Times bestseller Innumeracy; A Mathematician Reads the Newspaper; Once upon a Number, a Los Angeles Times Best Book of 1998; and A Mathematician Plays the Stock Market. He has also written scholarly papers on probability, logic, and the philosophy of science as well as book reviews and articles in such publications as the New York Times, the Wall Street Journal, Forbes, the Nation, Discover, the American Scholar, and the London Review of Books.