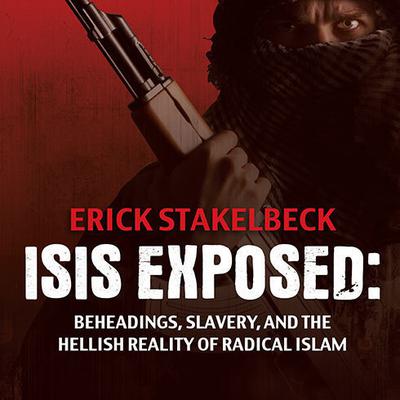 Terrorism expert Erick Stakelbeck pulls back the curtain on ISIS, the violent terrorist organization spreading death and hate in the Middle East. The rise of ISIS took the White House by complete surprise: President Obama called the group "JV," then was forced to reassess when ISIS began executing innocent American journalists. Now radicalized Americans and Europeans are joining ISIS's ranks. So who is ISIS? How powerful are they? And are they a threat to the homeland? Stakelbeck, a veteran national security reporter and a leading authority on the Middle East, has produced the definitive guide to America's most recent and most frightening enemy.

“If you want to know what makes ISIS tick, Erick Stakelbeck is your man. In ISIS Exposed: Beheadings, Slavery, and the Hellish Reality of Radical Islam, Stakelbeck reports the shocking facts about the world’s most vicious terrorist organization, and shows why America can’t afford to look away.” —Sean Hannity
“Don’t miss this very timely book. As Erick Stakelbeck shows, the Islamic State has opened a newly effective front in a worldwide terror war against the West, with tactics that appeal strongly to potential recruits right here in the US ISIS Exposed will give you the facts you need to understand the ISIS threat and hold our elected officials responsible for countering it.” —Newt Gingrich
“Sooner or later, America is going to have to face the facts about ISIS. Minimizing the threat and applying half measures against it, as President Obama has done, will only ensure that the terrorism continues to metastasize. In ISIS Exposed: Beheadings, Slavery, and the Hellish Reality of Radical Islam, Erick Stakelbeck reports the facts about the Islamic State: how it grew out of al Qaeda, spread mayhem across the Middle East, and is inspiring hundreds of young people—from London and Minneapolis to Syria—to commit acts of violence, conquest, and brutality.” —Mike Huckabee
“In ISIS Exposed, intrepid reporter Erick Stakelbeck excavates deep into the ISIS threat, shining a hard light on who they are, their horrific extremes in pursuit of a nightmare scenario, and why they’re so successful at recruiting young people from the West to join them in Syria—or worse, stay home and attack America from within. To understand this grave, deadly threat to world peace, read this riveting book, and quickly.” —Edwin Black, New York Times bestselling author of IBM and the Holocaust

Erick Stakelbeck is a sought-after expert on terrorism and national security issues with extensive experience in television, radio, print, and web media. Currently a correspondent and terrorism analyst for the Christian Broadcasting Network (CBN), he has his own show on CBN called Stakelbeck on Terror. Additionally, he tapes a weekly segment for The Savage Nation (the third highest rated radio talk show in America), and is regularly on The Sean Hannity Show, The O’Reilly Factor, and more. Formerly a senior writer and analyst for Steve Emerson’s Investigative Project on Terrorism, his writing and articles have appeared in the New York Post, Weekly Standard, National Review Online, Michelle Malkin’s HotAir.com, and more. He lives in Washington, DC.