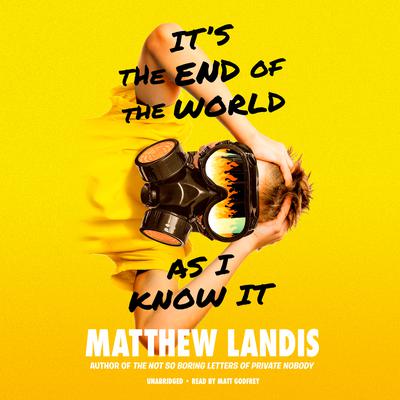 It’s the End of the World as I Know It

Derrick is sure that doomsday is coming, and he’s prepping to survive—whether his friends believe him or not—in this middle-grade novel for fans of Gary Schmidt, Gordon Korman, and Jack Gantos.

Ever since his mother was killed in the line of duty in Iraq, Derrick has been absolutely certain that the apocalypse is coming. And he’s prepared: he’s got plenty of canned goods, he’s fully outfitted with HAZMAT suits, and he’s building himself a sturdy fallout shelter. When his neighbor Misty insists on helping with the shelter, Derrick doesn’t think it’s such a good idea. Misty’s just had a kidney transplant, and her reaction to her brush with death is the opposite of Derrick’s: where Derrick wants to hide, Misty wants to see and do everything. But as confident as Misty is, Derrick’s doomsday fears just keep getting worse. When Derrick’s promised apocalypse day begins with a very strange disaster, Derrick and Misty have to figure out a way to survive—especially when the end of the world as they know it looks nothing like they expected.

“A sympathetic and even sometimes funny look at anxiety disorders and the complexity of grief…The terrifying allure of survivalism makes this journey through trauma a compelling one.” —Kirkus Reviews

Matthew Landis slays boredom wherever it lurks in his eighth-grade social studies classroom. He lives in Doylestown, Pennsylvania, with his wife and four kids, some chickens, and a boxer that acts much like the forgotten eldest child.