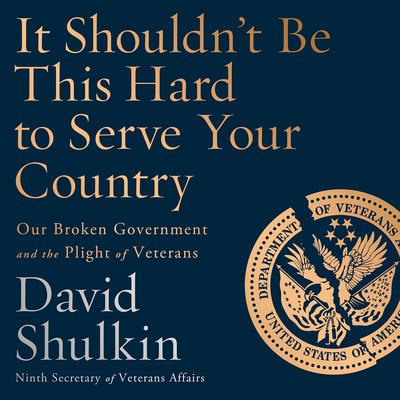 It Shouldn’t Be This Hard to Serve Your Country: Our Broken Government and the Plight of Veterans

By David Shulkin
Read by Daniel Thomas May

The former VA secretary describes his fight to save health care from politics and money-and how it was ultimately derailed by a small group of unelected officials with influence in the Trump White House.

Known in health care circles for his ability to fix ailing hospitals, Dr. David Shulkin was originally brought into government by President Obama, in an attempt to save the broken Department of Veterans Affairs. When President Trump made him VA secretary, Dr. Shulkin was as shocked as anyone.

Yet this surprise was trivial compared to what Shulkin encountered as the VA secretary: a team of political appointees devoted to stopping anyone -- including the secretary himself -- who stood in the way of privatizing the organization and implementing their agenda. In this uninhibited memoir, Shulkin opens up about why the government has long struggled to get good medical care to military veterans and the plan he had for how to address these problems. This is a book about the commitment we make to the people who risk their lives for our country, how and why we've failed to honor it, and why the new administration may be taking us in the wrong direction.