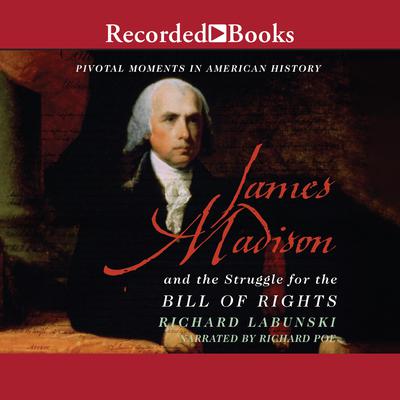 James Madison and the Struggle for the Bill of Rights

Today we hold the Constitution in such high regard that we can hardly imagine how hotly contested was its adoption. Now Richard Labunski offers a dramatic account of a time when the entire American experiment hung in the balance, only to be saved by the most unlikely of heroes--the diminutive and exceedingly shy James Madison. Here is a vividly written account of not one but several major political struggles which changed the course of American history. Labunski takes us inside the sweltering converted theater in Richmond, where for three grueling weeks, the soft-spoken Madison and the charismatic Patrick Henry fought over whether Virginia should ratify the Constitution. Madison won the day by a handful of votes, mollifying Anti-Federalist fears by promising to add a bill of rights to the Constitution. To do this, Madison would have to win a seat in the First Congress, which he did by a tiny margin, allowing him to attend the First Congress and sponsor the Bill of Rights. Packed with colorful details about life in early America, this compelling and important narrative is the first serious book about Madison written in many years. It will return this under-appreciated patriot to his rightful place among the Founding Fathers and shed new light on a key turning point in our nation's history

“A virtue of Labunski’s account is the generous attention he gives to Anti-Federalist luminaries like Patrick Henry, George Mason, and Richard Henry Lee—figures too often overlooked in our reverential regard for the founding. For those used to thinking of the Bill of Rights as carved in stone, it is also instructive to see just how large a role accident played in its creation.”  —New York Times Book Review
“Watch the wig powder fly as James Madison and Patrick Henry slug it out over the constitutional freedoms we take for granted today.”  —Atlantic Monthly
“[Richard] Poe colors Labunski’s tale with an appropriate array of significant pauses, emphases and hushed mock-whispers, bringing his book to life without resorting to overworked theatrical tricks. He may be a stage veteran, but Poe’s reading is anything but stagy.”   —Publishers Weekly
“A work interesting within its ambit, and capably carried off by Labunski.”  —Booklist
“[Richard Poe’s] excellent phrasing provides additional clarity to an already-accessible text.”  —AudioFile