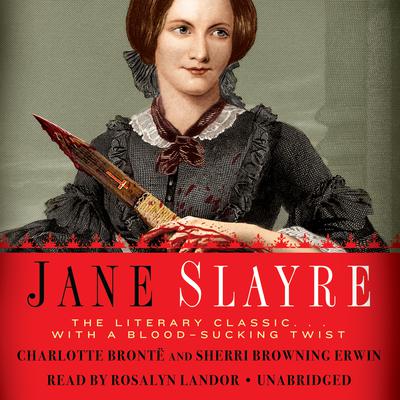 Jane Slayre: The Literary Classic … with a Blood-Sucking Twist

Vampyres, zombies, and werewolves transform Charlotte Brontë’s unforgettable masterpiece into an eerie paranormal adventure that will delight and terrify.

Raised by vampyre relatives, Jane grows to resent the lifestyle’s effect on her upbringing. No sunlight, nighttime hours, and a diet of bloody red meat is no way for a mortal girl to live. Things change for Jane when the ghost of her uncle visits her, imparts her parents’ slayer history, and charges her with the responsibility of striking out to find others of her kind and learn the slayer ways. After trying her luck at a school full of zombies, Jane finds a position as a governess, where she meets and falls in love with Mr. Rochester. But evil strikes in the form of Mr. Rochester’s first wife, a violent werewolf he keeps locked in the attic. Jane departs to study the slayer tradition with her cousins, but finds herself yearning to reunite with Mr. Rochester. She returns to find that Mr. Rochester has been bitten by the werewolf, and only she can release him from his curse.

“While Jane herself remains much the same, the supernatural additions prove highly amusing, turning the gothic elements of the original up to eleven while preserving the story’s post-Victorian coming-of-age conventions. Despite her whimsical and irreverent modifications, Erwin displays great affection for Brontë and her characters; the undeniable spark between Erwin’s Jane and Rochester is made all the more delightful by Jane’s plucky fearlessness in the face of evil. With the possible exception of purists, fans of Jane Eyre will find much to love, with moments of laugh-out-loud hilarity; horror fans unfamiliar with the original will also be pleased, though they’ll miss out on some of the comic nuance.” —Publishers Weekly
“No stranger to paranormal fiction, Erwin raises the bar for the next generation of ‘monster classics’…It’s a ghastly new spin on the familiar, page-turning classic Jane Eyre. Poignant and charming, Jane could give Buffy a run for her money. Unlike Seth Grahame-smith’s novel but disjointed Pride and Prejudice and Zombies (the zombies were an awkward insertion), Erwin seems to be channeling Brontë and the monsters are a seamless addition to the text. The story takes an unexpected turn towards the end, keeping readers entranced…Erwin’s gripping revision of a well-loved classic is enthusiastically recommended for all.” —Library Journal (starred review)
“This story is very entertaining and funny and pays tribute to the original classic. British actress Rosalyn Landor’s tells a great story and narrates with great animation.” —SoundCommentary.com

Charlotte Brontë (1816–1855) grew up in the isolated parsonage at Haworth, Yorkshire, where her father was curate. She and her sisters Emily and Anne thrived in fantasy worlds that drew on their voracious reading of Shakespeare, romantic, and gothic fiction. Charlotte was employed as a teacher and a governess before she began writing with her sisters. The Professor, her first novel, was rejected for publication until 1857, although Jane Eyre, published in 1847 under a pseudonym, achieved great success.

Sherri Browning Erwin, a graduate of Mount Holyoke College, lives in western Massachusetts with her nearly perfect husband and their charming actor son, amazing violinist daughter, a crafty corgi, and a very special pug. She writes historical and contemporary fiction, often with a paranormal twist.