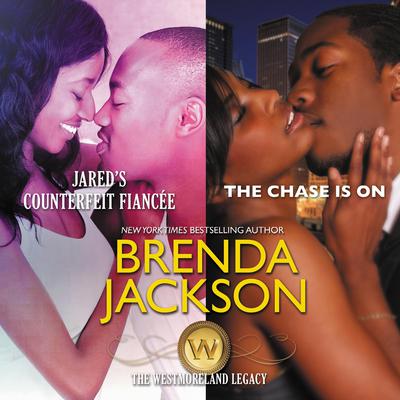 Jared's Counterfeit Fiancée & The Chase Is On

This confirmed bachelor is a heartbreak waiting to happen in this beloved Westmoreland novel from New York Times bestselling author Brenda Jackson.

Divorce attorney Jared Westmoreland has seen enough unhappy endings to avoid all the sticky entanglements that go with commitment—especially marriage. Even so, he can’t stop obsessing over the gorgeous stranger who barged into his office weeks ago. And when Jared meets Dana Rollins again, he decides to collect on the favor she owes him.

Pretending to be Jared Westmoreland’s fiancée isn’t high on Dana Rollins’s list of priorities. But she owes him a favor, and his persuasive charm and sinful masculinity—not to mention his sizzling kisses—are impossible to refuse. Helping Jared means spending time together publicly, which is tempting enough. But it’s the private—wild, hot, irresistible—moments that make Dana wonder how she’ll survive this engagement charade without falling in love for real …

The Chase Is On

Something sure looked tempting, and Chase knew it wasn’t on his restaurant’s menu. His new neighbor Jessica Claiborne was as deliciously enticing as the confections she created—so enticing, Chase was finding it difficult to concentrate on anything but the curve of her lips.

Jessica couldn’t deny the heat that sparked every time Chase was near. But she had a secret, one that could destroy the desire she saw burning in his eyes. Yet if she wanted a chance with Chase, she was going to have to reveal the truth and withstand the heat that was bound to go beyond the kitchen.