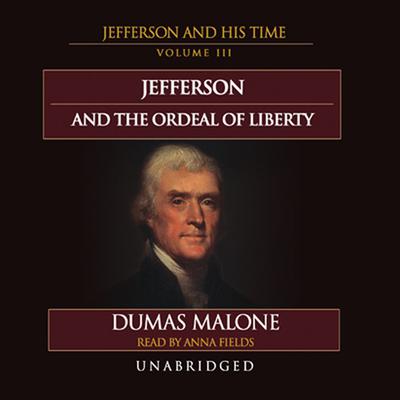 The Jefferson and His Time Series: Book 3

Part of a 1975Pulitzer Prize winning series for History

The third volume in Dumas Malone's distinguished, Pulitzer Prize–winning study of Thomas Jefferson and his time deals with one of the most fascinating and controversial periods of Jefferson's life. It includes the story of the final and most crucial phase of his secretaryship of state; his retirement to Monticello; his assumption of the leadership of the opposition party; and the crisis during the half-war with France, when the existence of political oppression was threatened and the freedom of individuals imperiled. Also covered is Jefferson'sown election to the presidency in 1801.

This six-volume biography has become the standard work on Jefferson's life.

“Jefferson and His Time is a masterly achievement of scholarship, the finest biography of Jefferson we have or are likely to have, and a monumental triumph of the senior American historian.” —New York Times Book Review
“Maintains the mature scholarship established by the earlier volumes. Academic in the best sense, it not only displays an intimate familiarity with the vast literature but contains an acute evaluation of Jefferson’s ideas and ideals.” —Saturday Review
“‘Perfect’ best describes Anna Fields’ reading of a very detailed account of Thomas Jefferson’s first 41 years.” —Booklist

Dumas Malone (1892–1986) taught history at American universities such as Yale and Columbia and served for seven years as director of the Harvard University Press before becoming the biographer-in-residence at the University of Virginia. His work as historian and biographer has earned him several honors, including the Pulitzer Prize, the Thomas Jefferson Award, the John F. Kennedy Medal, and the Presidential Medal of Freedom.