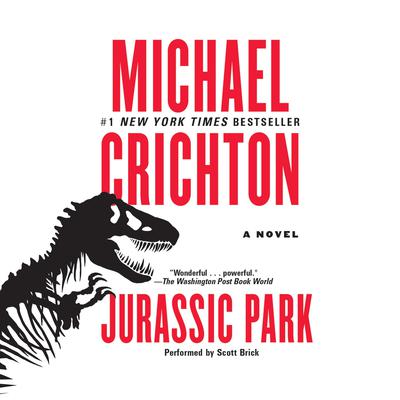 Winner of the 2016 Audie Award for Best Science Fiction Narration

An astonishing technique for recovering and cloning dinosaur DNA has been discovered. Now humankind’s most thrilling fantasies have come true. Creatures extinct for eons roam Jurassic Park with their awesome presence and profound mystery, and all the world can visit them—for a price.

Until something goes wrong.…

In Jurassic Park, Michael Crichton taps all his mesmerizing talent and scientific brilliance to create his most electrifying technothriller.

“Full of suspense.” —New York Times
“Wonderful…powerful.” —Washington Post
“Crichton’s dinosaurs are genuinely frightening.” —Chicago Sun-Times
“Frighteningly real…compelling…It’ll keep you riveted.” —Detroit News
“Scott Brick brings a chilling calm to the complex story with his deep, even tone and clear enunciation. Unlike the movie, the plot is a slow burn, full of dark twists and turns that Brick magnifies by slowing down his pace during moments of suspense while maintaining a cool, professional inflection. He does a particularly fine portrayal of John Hammond…One cannot deny the cerebral thrill when Brick brings the listener through the park’s gates. Absolutely riveting. Winner of the AudioFile Earphones Award.” —AudioFile
“Breathtaking adventure…a book that is as hard to put down as it is to forget.” —Time Out (New York)
“[A] tornado-paced tale, a slick package of info-thrills…and easily the most exciting dinosaur novel ever written. A sure-fire bestseller.” —Kirkus Reviews (starred review)
“Listening to Scott Brick’s cool and unnerving narration of this sci-fi classic started to get into my head and even percolate into my dreams…Despite this (or perhaps because of this) it’s still one I recommend for any road trip. It’s a stunner, in the best was possible.” —Audible.com (audio review)
“Jurassic Park fills out the film version’s kinetic story line with additional scenes, dialogue, and explanations while still maintaining Crichton’s trademark thrills-‘n’-chills pacing…The book really is better than the movie.” —Amazon.com
“Crichton ingeniously interweaves details of genetic engineering, computer wizardry, and current scientific controversy over dinosaurs to fashion a scary, creepy, mesmerizing techno-thriller with teeth.” —Publishers Weekly
“Readers can just imagine being caught in the open with these dinosaurs after there’s been a massive power outage on the island. Suspense, excitement, and good adventure pervade this book—and few YAs will be able to resist it.” —School Library Journal