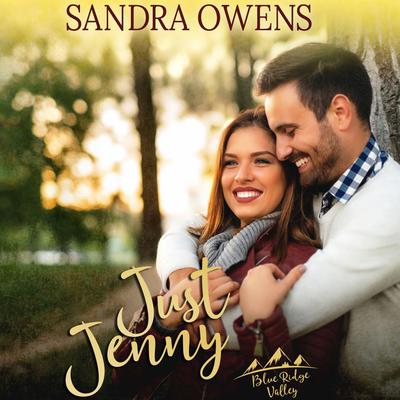 By Sandra Owens
Read by Felicity Hart  and Edward Thomas

The small mountain town of Blue Ridge Valley is the home of three best friends, Jenny, Autumn, and Savannah. Each woman believes she has her life perfectly planned, but there is a saying in the mountains.... If everything is coming your way, you're in the wrong lane.

In Just Jenny, Jenny Nance has a plan - save enough money to tour the world. The desire to traipse the globe is a dream she once shared with her twin sister. Jenny made a deathbed promise to her sister that she would go to all the places they had fantasized visiting together. Nothing will entice her to break her vow to Natalie, not even the sexy new Blue Ridge Valley police chief.... No matter how attracted she is to him.

Dylan Conrad left the Chicago Police Department to accept the position as Chief of Police in Blue Ridge Valley. Burned out and haunted by a tragedy of his own, he needs to get away from the memories tormenting him. He's hoping to find peace in the small mountain town, but the quirky residents, an infamous moonshiner, an errant prized bull, and a feisty redhead by the name of Jenny weren't quite what he had in mind.