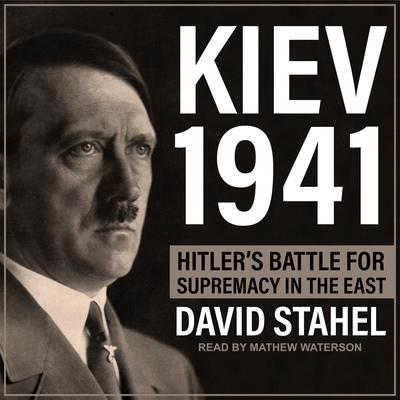 Kiev 1941: Hitler's Battle for Supremacy in the East

In just four weeks in the summer of 1941 the German Wehrmacht wrought unprecedented destruction on four Soviet armies, conquering central Ukraine and killing or capturing three quarters of a million men. This was the Battle of Kiev—one of the largest and most decisive battles of World War II and, for Hitler and Stalin, a battle of crucial importance. For the first time, David Stahel charts the battle's dramatic course and aftermath, uncovering the irreplaceable losses suffered by Germany's "panzer groups" despite their battlefield gains, and the implications of these losses for the German war effort. He illuminates the inner workings of the German army as well as the experiences of ordinary soldiers, showing that with the Russian winter looming and Soviet resistance still unbroken, victory came at huge cost and confirmed the turning point in Germany's war in the East.

David Stahel is a Senior Lecturer in History at the University of New South Wales in Canberra, Australia. His books include Operation Barbarossa and Germany’s Defeat in the East, Operation Typhoon, and The Battle for Moscow.