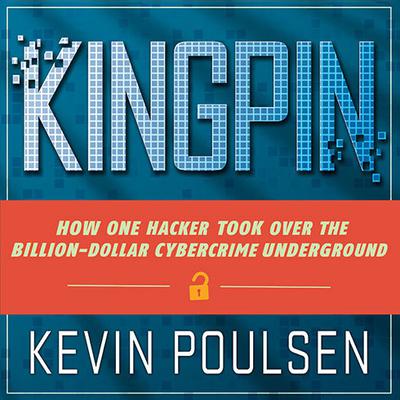 Kingpin: How One Hacker Took Over the Billion-Dollar Cybercrime Underground

The word spread through the hacking underground like some unstoppable new virus: Someone—some brilliant, audacious crook—had just staged a hostile takeover of an online criminal network that siphoned billions of dollars from the U.S. economy.
The FBI rushed to launch an ambitious undercover operation aimed at tracking down this new kingpin. Other agencies around the world deployed dozens of moles and double agents. Together, the cybercops lured numerous unsuspecting hackers into their clutches. Yet at every turn, their main quarry displayed an uncanny ability to sniff out their snitches and see through their plots.
The culprit they sought was the most unlikely of criminals: a brilliant programmer with a hippie ethic and a supervillain's double identity. Together with a smooth-talking con artist, he ran a massive real-world crime ring.

Kevin Poulsen oversees news and feature reporting at wired.com. In 2006 Poulsen conducted a computer-assisted investigation into the presence of registered sex offenders on MySpace, which spawned federal legislation. In June 2010 he and a cowriter broke the news that the government had secretly arrested a young Army intelligence analyst on suspicion of leaking hundreds of thousands of classified documents to WikiLeaks.