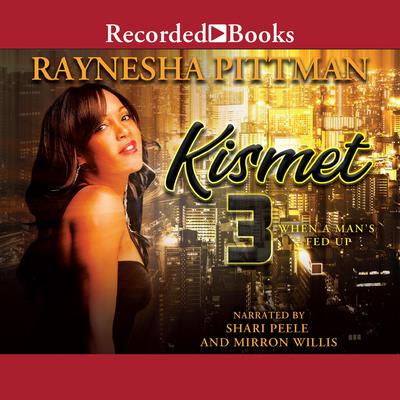 By Raynesha Pittman
Read by Mirron Willis  and Shari Peele

Savannah was everything Dre wanted in a woman: beautiful, educated, independent, and classy. On top of that, she was the best lover Dre had ever had. It had to be Kismet that brought these two together because karma would have never allowed it. Savannah had made too many negative deposits into karma's bank without any withdrawals to end up with a good man like Dre. Perhaps, karma and kismet were in cahoots. There was a lot about Savannah that Dre didn't know initially, like her non-nurturing, revenge-seeking, conniving, and unfaithful ways. Nor did Dre know that he had fallen in love with karma's new prey on the eve of her receiving a taste of everything she had dished out. However, there was also a lot about Dre that Savannah didn't know, nor did she take the time to find out. Two facets in particular were his low tolerance for infidelity and zero tolerance for lies! After pushing Dre over the edge multiple times with both, what will she do when he volunteers to jump off?

Raynesha Pittman is a prime example of the saying “What we come from does not dictate what we will go on to be.” An honors student and certified as gifted, she was in a Los Angeles juvenile corrections center when she discovered her love for writing. Her first novel, Kismet, was published in 2010. Pittman has since published several more books. She was nominated in the Hip Hop in the Ville Awards for Best Indie Author of the Year in January 2012 and was also nominated in the Prodigy Publishing Group’s second annual Urban Literary Awards for Most Likely to Succeed Debut Author of the Year in February 2012. In 2015 she was nominated for Journalist of the Year in the Southern Entertainment Awards.