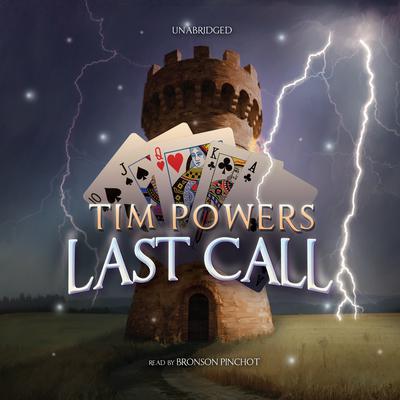 Winner of the 1993 World Fantasy Award for Best Novel

Winner of the 1993 Locus Award for Best Fantasy Novel

Scott Crane abandoned his career as a professional poker player twenty years ago and hasn’t returned to Las Vegas, or held a hand of cards, in ten years. But troubling nightmares about a strange poker game he once attended on a houseboat on Lake Mead are drawing him back to the magical city. For the mythic game he believed he won did not end that night in 1969—and the price of his winnings was his soul. Now, a pot far more strange and perilous than he could ever imagine depends on the turning of a card.

Enchantingly dark and compellingly real, this World Fantasy Award–winning novel is a masterpiece of magic realism set in the gritty, dazzling underworld known as Las Vegas.

“A novel of the supernatural and occult that is hard boiled, seamy, and suspenseful as the best film noir.” —Tom Robbins, New York Times bestselling author
“Brilliant! Compelling and satisfying! Tim Powers is one of our best writers, and Last Call is his best book yet.” —Raymond E. Feist
“A dizzying, stimulating magnum opus.” —USA Today
“Weird…grippingly written…a nightmarish novel, brilliantly researched and made.” —San Jose Mercury News
“A terrific read…A believable tapestry of greed and passion.” —Denver Rocky Mountain News
“Riveting…lyrical and brutal…A thrilling tale of gambling, fate, and fantastic adventure.” —Los Angeles Daily News
“Distinctive and commanding…A strikingly inventive novel.” —Publishers Weekly
“Tim Powers won the World Fantasy Award for this classic work, in which card player Scott Crane faces his long-estranged father in a complex game of poker. The stakes are the ownership of Scott’s body and the position of Fisher King, master of the elemental magic emanating from Las Vegas. Narrator Bronson Pinchot’s focused narration guides the listener through each twist of the eventful plot. Initially known for his facility with accents on television comedy, Pinchot proves equally adept at applying that skill to drama. He mixes in some tense but humorous scenes in which Scott disguises himself as a transvestite with a heavy Brooklyn accent.” —AudioFile
“Rich, top-flight mythic fantasy based on Jungian archetypes, Tarot symbolism, T. S. Eliot’s Waste Land, and the Parsifal legend…Knockout poker sequences give the symbolism real sizzle, while the genre is enlivened throughout with great lines from Eliot.” —Kirkus Reviews

Tim Powers is the author of numerous novels, including Last Call, Declare, Three Days to Never, and On Stranger Tides, the inspiration for the blockbuster film Pirates of the Caribbean: On Stranger Tides, starring Johnny Depp and Penélope Cruz. He has received the Locus, World Fantasy, and Philip K. Dick awards. He lives in San Bernardino, California.