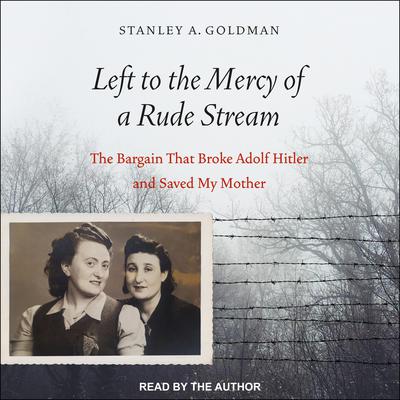 Left to the Mercy of a Rude Stream: The Bargain That Broke Adolf Hitler and Saved My Mother

Seven years after the death of his mother, Malka, Stanley A. Goldman traveled to Israel to visit her best friend during the Holocaust. The best friend's daughter showed Goldman a pamphlet she had acquired from the Israeli Holocaust Museum that documented activities of one man's negotiations with the Nazi's interior minister and SS head, Heinrich Himmler, for the release of the Jewish women from the concentration camp at Ravensbrück. While looking through the pamphlet, the two discovered a picture that could have been their mothers being released from the camp. Wanting to know the details of how they were saved, Goldman set out on a long and difficult path to unravel the mystery.

After years of researching the pamphlet, Goldman learned that a German Jew named Norbert Masur made a treacherous journey from the safety of Sweden back into the war zone in order to secure the release of the Jewish women imprisoned at the Ravensbrück concentration camp. Masur not only succeeded in his mission against all odds but he contributed to the downfall of the Nazi hierarchy itself. This amazing, little-known story uncovers a piece of history about the undermining of the Nazi regime, the women of the Holocaust, and the strained but loving relationship between a survivor and her son.

Stan Goldman is a professor of law at Loyola Law School in Los Angeles and the founding director of the Loyola Center for the Study of Law and Genocide. He co-anchored a national program on CBS Network Radio during the months of the O. J. Simpson trial and has spent over two years as a regular contributor on CNBC. Goldman has spent more than ten years as a full-time employee of the Fox News Channel as the network’s on-air legal editor, as well as a news correspondent, analyst, and occasional host.