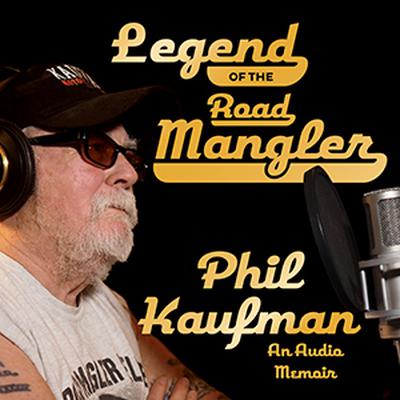 Legend of the Road Mangler: An Audio Memoir

In addition to road managing, he’s been an airman, an inmate, and (briefly) Charles Manson’s record producer. To fulfill a promise, he once borrowed a hearse, stole Gram Parsons’ body, and cremated it in the desert. You’ll hear the whole story as only Kaufman can tell it, along with the voices of some of the artists who know him best. Legend of the Road Mangler is a must-listen for music fans who love to know what goes on behind the scenes, on the bus, after the show, and out in the desert.

“The rock ’n’ roll universe is studded with legends and stories, and one of its brightest, most fascinating luminaries is a figure operating in the shadows, far from the spotlight. ‘Road Mangler’ Phil Kaufman is arguably the best-known road manager that has ever worked music’s highways, and his stories are intertwined with the stuff of legend.” —East Nashvillian

Philip C. Kaufman is an American record producer, tour manager, and author best known for stealing the body of country musician Gram Parsons and burning it in Joshua Tree National Monument. This was later chronicled in the film Grand Theft Parsons. Kaufman is the author of the book Road Mangler Deluxe, an autobiography about his experiences in the music business.