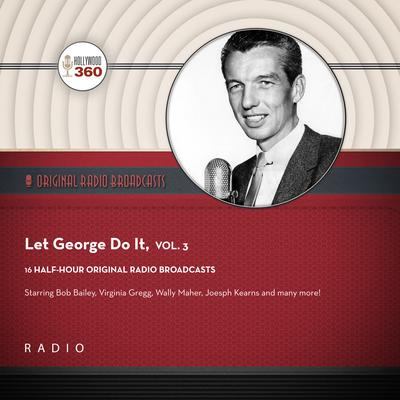 Bob Bailey stars as Detective George Valentine in one of the best and longest-running detective series of the Golden Age of radio.

﻿Detective series Let George Do It came to radio in 1946. It starred Bob Bailey as ex-GI and detective-for-hire George Valentine. Clients came to Valentine’s office after reading a newspaper carrying his classified ad: Personal notice: Danger’s my stock in trade. If the job’s too tough for you to handle, you’ve got a job for me. George Valentine. Valentine’s secretary was Claire Brooks, a.k.a. Brooksie (played by Frances Robinson, Virginia Gregg, and Lillian Buyeff). Other regulars included Brooksie’s kid brother, Sonny (played by Eddie Firestone); Lieutenant Riley, George’s nemesis on the police force (played by Wally Maher); and elevator operator and handyman in George’s apartment building Caleb (played by Joseph Kearns). The supporting casts included William Conrad, John Dehner, Lurene Tuttle, Harry Bartell, and Hans Conreid to name a few. Don Clark directed the scripts by David Victor and Jackson Gillis. Sponsored by Standard Oil, Let George Do It was last heard in 1955.