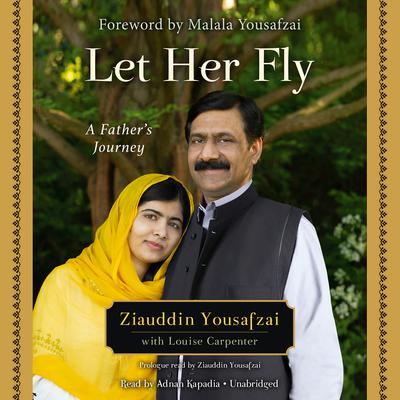 Let Her Fly: A Father’s Journey

This is the moving and inspirational story and deeply personal look into the Yousafzai family, in which Malala’s father traces his journey from an unconfident stammering little boy living in a mud hut in the mountainous region of Shangla to a man who has broken with tradition and proven there are many faces of feminism.

With humor and sincerity, Yousafzai describes his life before the Talibanization of Mingora, scenes of his sons Khusal and Atal flying kites on the roof, his progressive partnership with his wife Toor Pekai, and the challenge of raising children in an unfamiliar country. He reveals his deep appreciation for women and the importance of teaching girls in their patriarchal society. After Malala was shot by the Taliban, the Yousafzai family was completely uprooted from their home in the Swat Valley and forced to start over in the United Kingdom. Now, Ziauddin expresses the complex pain and joy of his return, six years later, to the site of Malala’s attack.

Let Her Fly is an intimate family portrait by the father of one of the most remarkable leaders in the world today. Ziauddin and Toor Pakai have set a singular example for parents who hope to empower their children to make a difference. Let Her Fly will resonate with anyone who has ever cared for a child, as Ziauddin Yousafzai shares what he’s learned from his children, and what he hopes to teach the world.

“A straightforward, loving treatise on becoming a man dedicated to uplifting women as equals.” —Kirkus Reviews
“Those interested in learning more about Malala’s incredible life will be enriched by her father’s deeply personal account of courage and perseverance during a life of activism.” —Publishers Weekly
“Taking credit for little beyond never ‘cutting her wings,’ Yousafzai…provides a time line of the events leading to the place Malala now occupies in world history. Long an advocate of fairer treatment of girls and women despite the patriarchal culture of his homeland, teacher Yousafzai…provides a frank account of the toll this activism took on Malala and the family.” —Library Journal
“Narrator Adnan Kapadia…takes us into the intimacies of family life and parenting. He is measured, warm, and steady as he explains how he saw his daughter as equal to his sons and raised her to be comfortable asking him anything…Listeners will enjoy Kapadia’s capable style. His consistency throughout the brief chapters gives us a sense of the steely determination that helped this family weather their considerable challenges.” —AudioFile

Ziauddin Yousafzai is a Pakistani diplomat, educator, educational activist, and human rights campaigner. Best known as the father of Nobel laureate Malala Yousafzai, he is the co-founder of Malala Fund and serves as the chairman of its board of directors. the Board for the Malala Fun. He also serves are the United Nations special adviser on global education and as the educational attaché to the Pakistani Consulate in Birmingham, England.