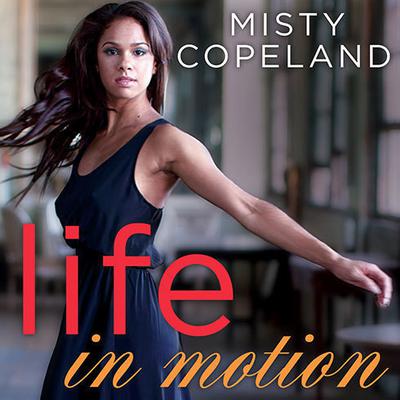 Life in Motion: An Unlikely Ballerina

"Picture a ballerina in a tutu and toe shoes. What does she look like?" As the only African-American soloist dancing with the prestigious American Ballet Theatre, Misty Copeland has made history. But when she first placed her hands on the barre at an after-school community center, no one expected the undersized, anxious thirteen-year-old to become a ground­breaking ballerina. When she discovered ballet, Misty was living in a shabby motel room, struggling with her five siblings for a place to sleep on the floor. A true prodigy, she was dancing en pointe within three months of taking her first dance class and performing professionally in just over a year: a feat unheard of for any classical dancer. But when Misty became caught between the control and comfort she found in the world of ballet and the harsh realities of her own life (culmi­nating in a highly publicized custody battle), she had to choose to embrace both her identity and her dreams, and find the courage to be one of a kind. With an insider's unique point of view, Misty opens a window into the life of a professional ballerina who lives life center stage: from behind the scenes at her first auditions to her triumphant roles in some of the most iconic ballets. But in this beautifully written memoir, she also delves deeper to reveal the desire and drive that made her dreams reality. Life in Motion is a story of passion and grace for anyone who has dared to dream of a different life.

An unexpected page-turner. . . . Her story is an inspiration to anyone-man or woman, black or white-who has ever chased a dream against the odds, and the grace with which she triumphs is an example for us all. —Booklist Starred Review

Misty Copeland is a principal dancer at American Ballet Theatre and the author of the New York Times bestselling memoir Life in Motion and the award-winning children’s book Firebird. She made her 2015 Broadway debut in On the Town, putting a show that had reportedly been suffering financially for months into the Broadway box office top ten for the two weeks she guest-starred as Ivy Smith. She’s been featured in the New York Times, on 60 Minutes, and was named one of Self magazine’s Best Bodies of 2014 and Time magazine’s 100 Most Influential People.