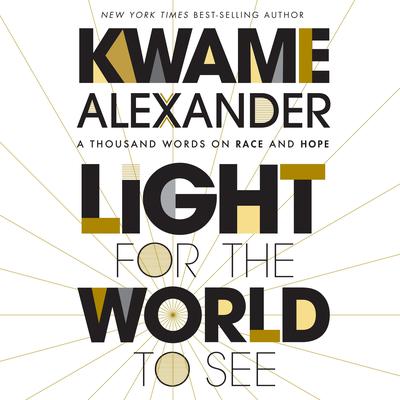 Light for the World to See: A Thousand Words on Race and Hope

From NPR correspondent and New York Times bestselling author, Kwame Alexander, comes a powerful and provocative collection of poems that cut to the heart of the entrenched racism and oppression in America and eloquently explores ongoing events.   A book in the tradition of James Baldwin’s “A Report from Occupied Territory,”  Light for the World to See is a rap session on race. A lyrical response to the struggles of Black lives in our world . . . to America’s crisis of conscience . . . to the centuries of loss, endless resilience, and unstoppable hope.   Includes an introduction by the author and a bold, graphically designed interior.

The widely acclaimed author of nearly three dozen books for children, Alexander turns his poetic attention to three milestones in recent U.S. history: the murder of George Floyd by police officers in Minneapolis, the kneeling protests of Colin Kaepernick during the national anthem before NFL games, and the election of Barack Obama. Alexander works through these events in reverse chronological order, committing one long poem apiece to each of the three turning points. The poems are defined as much by their direct language and stark imagery ("we can’t hold a gun / we can’t stop that whip / we can’t wear this skin") as by the highly stylized typography: much of the text appears on yellow banners against black backgrounds, mimicking police tape at crime scenes. Other pages include broken chains in grayscale and the American flag with its stars replaced by X's. One of the most powerful passages occurs when Alexander lists the names of Black individuals murdered by police and white vigilantes and stirs his readers to action. A brave intervention by a talented writer of conviction...Alexander's uniquely designed poems offer a useful entry point for conversations about racism in America."--Booklist "This collection poignantly captures the pain, rage, injustice, and resistance that mark this moment in American history."--School Library Journal —
"[Kwame Alexander’s] three wonderfully performed poems—“American Bullet Points,” “Take a Knee,” and “The Undefeated”—are a potent combination of elegy, protest, and celebration of Black triumph. Listeners should see the print edition for its striking visual elements. And listen to the audiobook for Alexander’s incredibly powerful performance. Winner of the AudioFile Earphones Award.” —AudioFile
“A brave intervention by a talented writer of conviction. Alexander’s uniquely designed poems offer a useful entry point for conversations about racism in America.” —Booklist

Kwame Alexander is a poet, speaker, educator, and bestselling author of more than a dozen books, including The Crossover, which received the 2015 John Newbery Medal for the Most Distinguished Contribution to American Literature for Children. His other works include the novels He Said, She Said and Booked, as well as his nonfiction debut, The Playbook: 52 Rules to Aim, Shoot, and Score in This Game Called Life. He is the cofounder of LEAP for Ghana, an international literacy program.