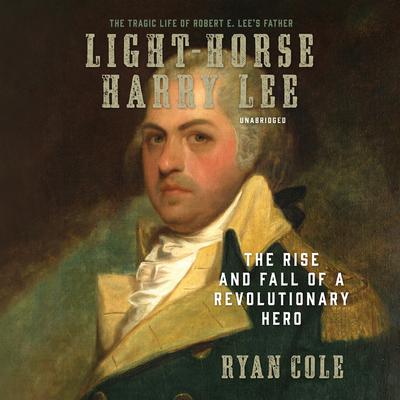 Light-Horse Harry Lee: The Rise and Fall of a Revolutionary Hero

He was a dashing military hero who led the fight for America’s independence. His son would later become the general who almost tore America apart.

Henry Lee III—whose nickname, “Light-Horse,” came from his legendary exploits with mounted troops and skill in the saddle—was a dashing cavalry commander and hero of America’s War for Independence. By now most Americans have forgotten about Light-Horse Harry Lee, the father of Confederate general Robert E. Lee, but this new biography reveals he may be one of the most fascinating figures in our nation’s history. A daring military commander, Lee was also an early American statesman whose passionate argument in favor of national unity helped ratify the Constitution. When President George Washington needed to suppress the Whiskey Rebellion, he sent in his friend Light-Horse Harry Lee with twelve thousand militiamen. When Washington died, Lee was the man who famously eulogized our first president as “first in war, first in peace and first in the hearts of his countrymen.” With incredible stories about Light-Horse Harry Lee’s interactions with famous men and women—including George and Martha Washington, Nathanial Greene, James Madison, Alexander Hamilton, Thomas Jefferson, Aaron Burr—this book paints a rich portrait of an underappreciated American character and provides unique new insight into the upbringing and motivations of Lee’s infamous son, General Robert E. Lee.

“This page-turning biography brings Robert E. Lee’s father vividly back to life.” —Harold Holzer, author of Lincoln and the Power of the Press
“Light-Horse Harry blazes across the pages of Ryan Cole’s narrative like a meteor—and his final crash is as destructive. Cole tells his story with care, sympathy, and where necessary, sternness. This book is a great, and sometimes harrowing read.” —Richard Brookhiser, author of Founding Father: Rediscovering George Washington

Ryan L. Cole holds degrees in history and journalism from Indiana University and has written extensively about American history and literature for the Wall Street Journal, National Review, and the New Criterion, among many others. He served as a speechwriter and chief researcher for Indiana governor Mitch Daniels and Deputy Secretary of Health and Human Services Tevi Troy and was a staff writer for the Abraham Lincoln Bicentennial Commission.