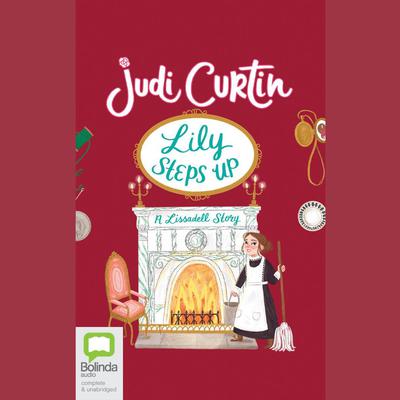 Lily Steps Up: A Lissadell Story

Lily and her friend Nellie are young housemaids in service in the big house. They work for Lady Mary and Sir Josslyn Gore-Booth at Lissadell. As well as her housework and duties, Lily helps out in the local school of needlework , hoping it might be a step on the way to her dream of being a teacher.

Though they work hard, there’s lots of fun to be had at Lissadell, like friendship, fun, and madcap bicycle rides with Sir Josslyn’s niece Maeve, daughter of the famous Republican, Constance Markievicz.

Before Nellie came to Lissadell, she had a hard life in the workhouse, where she was separated from her family. So when Lily and Maeve manage to track down Nellie’s long lost sister, Johanna, and fix it so she comes to Lissadell as Lady Mary’s maid, Nellie is overjoyed. But when a valuable locket goes missing, Johanna is the chief suspect; should Lily take the blame, so that the sisters can stay together?

Judi Curtin has crafted a strong representation of the historical time period, including an appearance by and mentions of Constance Markievicz, and also featuring subjects that Lily reads in the newspaper and letters she gets from her friend who has gone to work in America. Lily Steps Up is a warm, engaging story of friendship set in the changing world of early twentieth century Ireland.

Judi Curtin is the best-selling author of the Alice and Megan series, the Eva series, and several other books. Judi’s new series, beginning with Time After Time, is about Beth and Molly, accidental time-travelling best friends. Judi Curtin won the Irish Book Award Senior 2017 for Stand By Me.