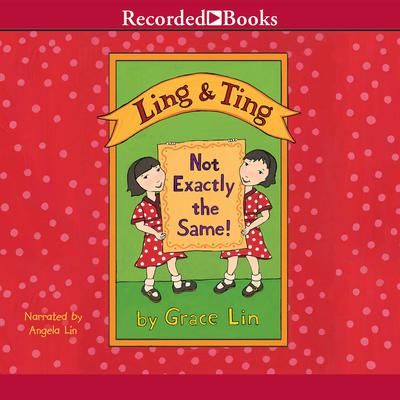 Ling & Ting: Not Exactly the Same!

Grace Lin is the New York Times best-selling author of the Newbery Honor book Where the Mountain Meets the Moon. In Ling & Ting, Lin crafts a charming tale about a pair of Chinese-American twins who insist that, despite their physical appearance, they are NOT alike. Ling can't use chopsticks, no matter how hard she tries. And Ting can't sit still-a characteristic that makes the twins more different than ever after a small mishap at the barbershop. "Lin . shows her versatility once again in an original book that tells its story clearly while leaving room for thought and discussion."-Booklist, starred review

“Lin…shows her versatility once again in an original book that tells its story clearly while leaving room for thought and discussion.”  —Booklist (starred review)
“This relationship, combined with the simple sentence structure, repetitive text, and straightforward illustrations that reinforce new vocabulary words, will put this easy reader in the same category as Arnold Lobel’s Frog and Toad books” —School Library Journal

Grace Lin is an award-winning illustrator and author of children’s books. Her novel Where the Mountain Meets the Moon was a Newbery Honor book and a New York Times bestseller. She is a recipient of the Literary Lights for Children Award and was an Astrid Lindgren Memorial Award nominee for the United States. She received her degree from the Rhode Island School of Design.