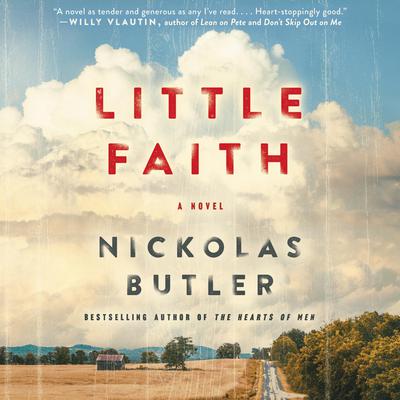 In this moving new novel from celebrated author Nickolas Butler, a Wisconsin family grapples with the power and limitations of faith when one of their own falls under the influence of a radical church.

Lyle Hovde is at the onset of his golden years, living a mostly content life in rural Wisconsin with his wife, Peg, daughter, Shiloh, and six-year old grandson, Isaac. After a troubled adolescence and subsequent estrangement from her parents, Shiloh has finally come home. But while Lyle is thrilled to have his whole family reunited, he’s also uneasy: in Shiloh’s absence, she has become deeply involved with an extremist church, and the devout pastor courting her is convinced Isaac has the spiritual ability to heal the sick.

While reckoning with his own faith—or lack thereof—Lyle soon finds himself torn between his unease about the church and his desire to keep his daughter and grandson in his life. But when the church’s radical belief system threatens Isaac’s safety, Lyle is forced to make a decision from which the family may not recover.

Set over the course of one year and beautifully evoking the change of seasons, Little Faith is a powerful and deeply affecting intergenerational novel about family and community, the ways in which belief is both formed and shaken, and the lengths we go to protect our own.

“Butler weaves questions surrounding faith, regret, and whether it’s possible to love unconditionally into every page of this potent book…This is storytelling at its finest.” —Publishers Weekly (starred review)
“A deeply moving novel about love, faith, and loss…A beautifully realized meditation on the nature of parenting and living in a perplexing (and often cruel) world.” —Library Journal (starred review)
“A heartland novel that evokes the possibility of everyday miracles…The novelist loves this land and these characters, with their enduring values amid a way of life that seems to be dying.” —Kirkus Reviews
“Exploring the complexities of faith and family, Butler also tackles the power and pitfalls of devout Christianity…Little Faith is quietly and deeply moving.” —Booklist
“Accomplished narrator Danny Campbell gives a loving tone to a story of an ‘unbelieving’ grandfather who desperately wants to keep his grandson and daughter safe from a radical religious cult in Wisconsin. Campbell’s folksy manner works well with the author’s storytelling style. He captures the regional speech of rural Wisconsin and makes listeners feel as if they’re hearing their own grandfather telling a dark family secret. With subtle emotional inflections and changes in timbre, Campbell captures the man’s loving nature as well as the confusion and frustration he feels in a situation with no easy choices.” —AudioFile

Nickolas Butler was born in Allentown, Pennsylvania, and raised in Eau Claire, Wisconsin. His writings have appeared in Narrative Magazine, Ploughshares, the Kenyon Review Online, the Progressive, the Christian Science Monitor, and elsewhere. He is a graduate of the University of Wisconsin and the Iowa Writers’ Workshop.