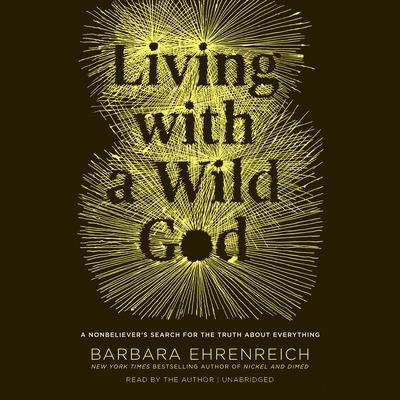 Living with a Wild God: ¿A Nonbeliever's Search for the Truth about Everything

A Publishers Weekly Pick of the Week, April 2014

The New York Times bestselling author of Nickel and Dimed returns with a powerful memoir of her quest, beginning in childhood, to discover "the truth"—about the universe and everything else.

In middle age, Barbara Ehrenreich came across the journal she had kept during her tumultuous adolescence and set out to reconstruct that quest, which had taken her to the study of science and through a cataclysmic series of uncanny—or as she later learned to call them, "mystical"—experiences. A staunch atheist and rationalist, she is profoundly shaken by the implications of her lifelong search.

Part memoir, part philosophical and spiritual inquiry, Living with a Wild God brings an older woman's wry and erudite perspective to a young girl's uninhibited musings on the questions that, at one point or another, torment us all. Certain to be a classic, Living with a Wild God combines intellectual rigor with a frank account of the inexplicable, in Ehrenreich's singular voice, to produce a true literary achievement.

“Based on a notebook she started when she was fourteen after a series of puzzling ‘dissociative’ episodes that verged on the mystical, Ehrenreich…fashions an intensely engrossing study of her early quest for ‘cosmic knowledge.’…Using her journal extracts as a point of departure, Ehrenreich returns with vigor to her youthful quest, enlisting all of her subsequent scientific training to find an explanation for what had occurred to her as a girl, yet offering only a glimmer in her wise and tolerant later years of a possibility of a ‘living, breathing Other.’” —Publishers Weekly (starred review)
“Emotionally evocative, at times disturbing, Ehrenreich’s work is engaging and invites—no, demands that its readers question the world around them and everything they believe about it. The author’s rational approach to researching ‘religious experiences’ similar to her own, her mission to find an answer to: ‘Why are we here?’ is profoundly relatable to those who have asked similar questions, who have wondered at humanity’s purpose, and who have probed at the presence of the Other. Part memoir, part mystical journey, this is essential for anyone with an interest in religious studies, contemporary history, or memoir and biography.” —Library Journal (starred review)
“Barbara Ehrenreich is smart, forceful, and wryly entertaining, both in her writing and her narration…Ehrenreich’s performance is so honest and appealing that it demands attention.” —AudioFile
“A powerful, honest account of a lifelong attempt to understand that will please neither theists nor atheists.” —Kirkus Reviews

Barbara Ehrenreich is the author of over a dozen books, including the New York Times bestsellers Nickel and Dimed, Bait and Switch, Living with a Wild God, and The Worst Years of Our Lives.