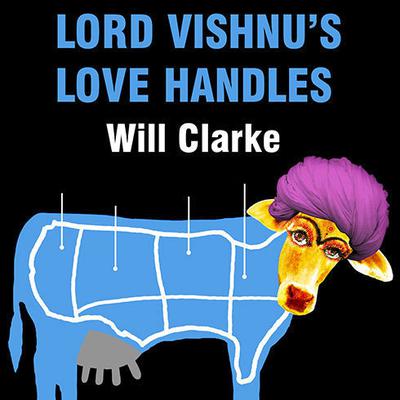 By Will Clarke
Read by William Dufris

Lord Vishnu's Love Handles is the story of a man who is teetering on the edge of financial ruin and insanity until a couple of secret agents teach him what it really means to lose his mind. Travis Anderson has a psychic gift. Or so he thinks. So far he's milked his premonitions only to acquire an upper-middle-class lifestyle — pretty wife, big house, and a shiny Range Rover — without having to make any real effort. But recent visions threaten his yuppie contentment. Haunted by omens of impending cancers, stillborn babies, and personal train wrecks, he is compelled to make a series of inaccurate and horrifying prophecies that humiliate him in front of his fellow country club members. The IRS gets Travis's number, too, demanding an audit of his sloppy bookkeeping. Drowning in mounting financial problems and apparent mental illness, Travis tries booze, pills, even golf to stay afloat, but nothing works. His wife and friends are forced to stage an intervention. Travis is in danger of losing his family, his career, and ultimately, his sanity. That is, until he meets a Hindu holy man in rehab who claims to be the final incarnation of Lord Vishnu. Suddenly, the tragically shallow Travis is saddled with the responsibility of bettering mankind and saving the world.

Will Clarke is an American novelist who is the author of Lord Vishnu’s Love Handles: A Spy Novel (sort of) and The Worthy: A Ghost’s Story. A native of Lousiana, Clarke’s books eventually became underground hits in the early part of the 2000s. Both books have been selected as the New York Times Editors’ Choice while Clarke was named the “Hot Pop Prophet” by Rolling Stone magazine in 2006.