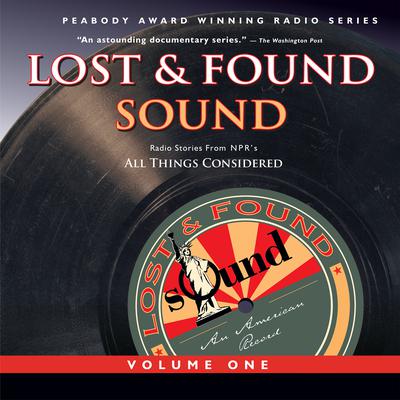 On January 1, 1999, All Things Considered aired the first in a series of richly layered stories that trace the soundtrack of the 20th century. Broadcast weekly through 1999, continuing monthly through 2000, Lost & Found Sound chronicles, reflects, and celebrates the human experience in rare recordings and "sonic snapshots" submitted by listeners. Blending the historic with the everyday, the monumental with the personal, this is evocative, haunting, eclectic listening—endangered sounds, shifting accents, vanishing voices, home recordings, and audio artifacts that reveal a sense of place and mark the passage of time. Contents: • Tony Schwartz: 30,000 Recordings Later
• Quest for Sound: Gettysburg Eyewitness
• Fishman, Fishman Cigar Stories, narrated by Andy Garcia
• Carnival Talkers
• LBJ and the Helium-Filled Astronauts
• Listening to the Northern Lights
• West Virginia Steam Trains
• Tennessee Williams: The Pennyland Recordings
• Sound Restoration
• The Partridge Family Grand Tour

Jay Allison is one of public radio’s most honored producers. He has produced hundreds of documentaries and features for radio and television and has won virtually every major award, including six Peabodys. He is a founder of the Public Radio Exchange (prx.org), a distribution system for public radio, and Transom.org, a site that helps people tell their own stories. He produces The Moth Radio Hour and was the curator and producer of This I Believe on NPR. He is also the founder of the public radio stations for Martha’s Vineyard, Nantucket, and Cape Cod where he lives.

The Kitchen Sisters (Davia Nelson and Nikki Silva), heard on NPR, have received Peabody Awards for Lost and Found Sound and for The Sonic Memorial, a chronicling of the life and history of the World Trade Center and surrounding neighborhood.