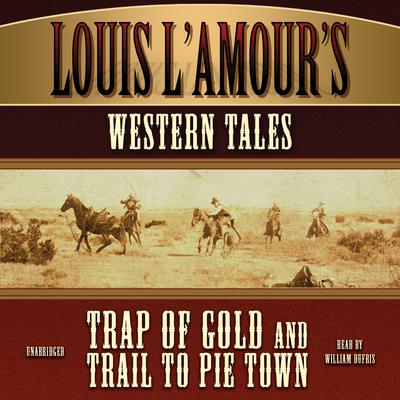 Here are two exciting adventures from the pen of Louis L'Amour.

Wetherton has been three months out of Horsehead before he finds his first color. The gold is located at the head of a fan laying in a gigantic crack in a granite upthrust that resembles a fantastic ruin. This crumbling granite is slashed with a vein of quartz that is literally laced with gold! The problem is that the granite upthrust is unstable, and taking out the quartz might bring the whole thing tumbling down.

Dusty Barron rides his steel-dust stallion at full gallop out of town. Behind him, a man lies bleeding on the floor of a saloon. Dan Hickman had called him yellow and gone for a gun, but Dan was a mite slow. Maybe if Emmett Fisk and Gus Mattis hadn't appeared just as he was making a break from the saloon, he could have explained himself. But they reached for their guns when they saw him, and Dusty had hit the desert road. The dead man had relatives in the area, and now it looked like he was going to be facing a clan war.

“[Louis L’Amour] made the modern Western a national pastime.” —Smithsonian
“L’Amour is the kind of storyteller who makes the wolves come out of the woods to listen.” —People