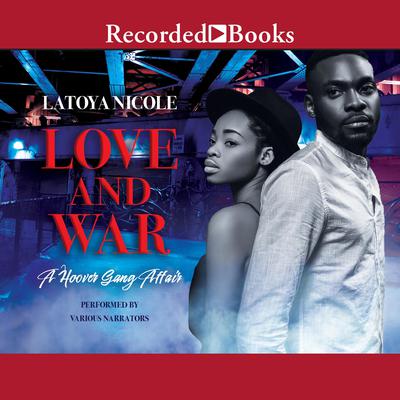 By Latoya Nicole
Read by B. B. Lipton Bennett , Ace Bentley , and others

The Love and War Series: Book 1

They say all is fair in love and war, but how do you fight when you don’t know the enemy is the one you love? Will the Hoover gang be able to reign supreme, or will they fall at the hands of the women who are supposed to have their backs?

The infamous Hoover gang - Babyface, Blaze, Quick, and Shadow - have taken Chicago by storm. These four are not your average street thugs. Bank robbers by day and club owners by night, they have held on to their place at the top by never trusting anyone enough to allow them in their circle. The moment they do, all hell breaks loose.

Zayn “Blaze” Hoover has always lived by the code, never trust a female; hit and quit. Then he meets Drea and starts doing everything differently. He wants to give her the world, and he’s ready to change his ways for her - until someone sets him up, and all signs lead to her.

Zavien “Shadow” Hoover is the youngest of the crew. He’s never wanted the females that come along with their lifestyle. Engaged to his first love, Shirree, he’s ready to make her his wife. After a big argument and a night of drinking, however, Shadow does something that could jeopardize their love forever. Out for revenge, Shirree might be crossing a line that puts them both in a difficult position.

Zavier “Quick” Hoover is not overly impressed by the ladies who surround him, but Alaysia sweeps him away with her beauty - at least on the outside. On the inside, she’s ugly to the core. The harder he falls, the closer she gets to his circle. Unbeknownst to him, that’s where she wanted to be all along. Not only do her scandalous ways affect Quick, but the whole Hoover gang may be at risk.

Zaire “Babyface” Hoover has always been open to love, but when he finds it, will he get the chance to be happy? Being the oldest, he has to clean up the mess his brothers created, and he might lose his love in order to do it.

Latoya Nicole has always had the gift of writing and loved to do so, but she put her dream on hold in order to care for her autistic child. Now the thirty-five-year-old mother of one is ready for the world to share with her as she spins tales of romance, drama, lies, and deceit. Born and raised in Chicago, she has witnessed firsthand how cold the streets can be. Step into the lives of her characters as they walk you through life as they know it in the Windy City.