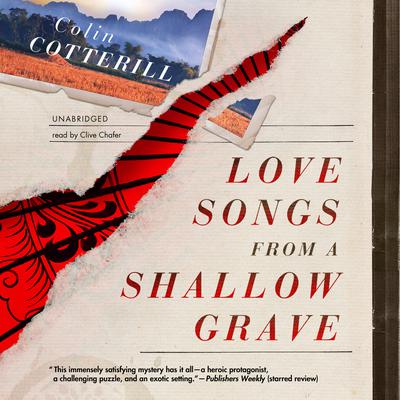 Love Songs from a Shallow Grave

Three young Laotian women have died from fencing-sword wounds. Each of them had studied abroad in an Eastern bloc country. Before he can complete his investigation, Dr. Siri is lured to Cambodia by an all-expenses-paid trip. Accused of spying for the Vietnamese, he is imprisoned, beaten, and threatened with death. The Khmer Rouge is relentless, and it is touch and go for the dauntless, seventy-four-year-old national—and only—coroner of Laos.

“Superb…A strong supporting cast…This immensely satisfying mystery has it all—a heroic protagonist, a challenging puzzle, and an exotic setting.” —Publishers Weekly (starred review)
“You get a real feeling for what Laos was like in the ’70s. The humor is wonderful, too—very subtle, very British.” —New York Post
“This is the seventh and most sardonic of Mr. Cotterill’s Dr. Siri series, and it is not easy to cope with the combination of misery and merry melancholy that he employs. His writing, as always, is skillful and smooth and his plot is artfully strung together. The book fascinates as it chills.” —Washington Times
“Colorful.” —Seattle Times
“It’s a rare treat to say that a book placed so far into a series is the best one. Authors more often than not run out of steam by the seventh book. Not Colin Cotterill.” —Oregonian
“Cotterill, a resident of Thailand, has a gift for creating memorably eccentric characters, while spinning a fascinating array of Southeast Asian history and folklore into his narratives.” —Japan Times
“Dr. Siri is a one-of-a-kind protagonist rivaled only by Eliot Pattison’s Shan Tao Yung. Highly recommended for series fans and readers who enjoy international mysteries.” —Library Journal
“Levity lifts the tale…but [Cotterill’s] many fans know that, in this series, wit comes at a price.” —Booklist