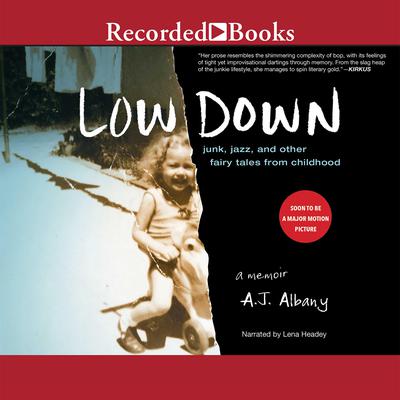 By A. J. Albany
Read by Lena Headey

A. J. Albany Recorded Books, Inc. by arrangement with Simon and Schuster Audio

A. J. Albany's recollection of life with her father, the great jazz pianist Joe Albany, is the story of one girl's unsentimental education. Joe played with the likes of Charles Mingus, Lester Young, and Charlie Parker, but between gigs he slipped into drug-induced obscurity. It was during these times that his daughter knew him best. After her mother disappeared, six-year-old Amy Jo and her charming, troubled father set up housekeeping in a seamy Hollywood hotel. While Joe finished a set in some red-boothed dive, chances were you'd find Amy curled up asleep on someone's fur coat, clutching a 78 of Louis Armstrong's "Sugar Blues" or, later, a photograph of the man himself, inscribed, "To little Amy Jo, always in love with you--Pops." Wise beyond her years and hip to the unpredictable ways of Old Lady Life at all too early an age, A. J. Albany guides us through the dope and deviance of the late 1960s and early 1970s in Hollywood's shadowy underbelly and beyond. What emerges is a raw, gripping, and surprisingly sympathetic portrait of a young girl trying to survive among the outcasts, misfits, and artists who surrounded her.

A. J. Albany was born in 1962 and is the daughter of legendary bebop pianist Joe Albany. She currently resides in Los Angeles with her husband and their two children.