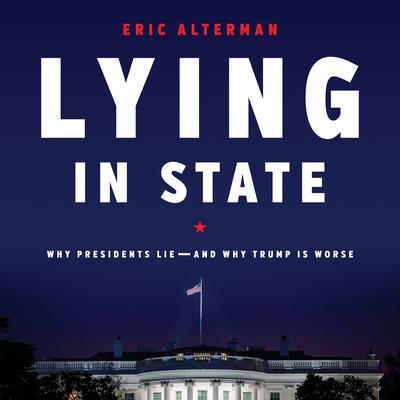 Lying in State: Why Presidents Lie—And Why Trump Is Worse

This definitive history of presidential lying reveals how our standards for truthfulness have eroded -- and why Trump's lies are especially dangerous.

If there's one thing we know about Donald Trump, it's that he lies. But he's by no means the first president to do so. In Lying in State, Eric Alterman asks how we ended up with such a pathologically dishonest commander in chief, showing that, from early on, the United States has persistently expanded its power and hegemony on the basis of presidential lies. He also reveals the cumulative effect of this deception-each lie a president tells makes it more acceptable for subsequent presidents to lie-and the media's complicity in spreading misinformation. Donald Trump, then, represents not an aberration but the culmination of an age-old trend.

Full of vivid historical examples and trenchant analysis, Lying in State is essential reading for anyone seeking to understand how we arrived in this age of alternative facts.

“Alterman’s merry inventory—which includes detailed breakdowns of many of the 10,000 lies calculated to have come from Trump’s mouth between January 2017 and September 2019—is damning.” —Kirkus Reviews
“This vigorously argued account…makes a strong case for the links between presidential dishonesty and the expansion of executive powers since WWII…and for the media’s culpability in failing to hold presidents to account.” —Publishers Weekly
“Eric Alterman’s superb book, Lying in State, is full of direly needed insights…Alterman—by virtue of his in-depth research—enables us to deal with an all-important question: Why so many Trump followers have become addicted to what Republican Senator Jeff Flake termed the ‘sugar high of populism, nativism, and demagoguery.’" — Walter LaFeber, The Andrew Tisch and James Tisch Distinguished University Professor Emeritus, Cornell University
“An astounding and methodical inventory of presidential lying from George Washington to Donald Trump. Alterman shows how the strategic lying of past presidents about specific episodes of war, corruption and injustice has given way in the Trump administration to indiscriminate lying about everything. This is a cogently written, timely and profoundly troubling book for the new age of conspiracy theory, fake news and online disinformation. Democracy is in peril—and that’s no lie.” —Congressman Jamie Raskin
“A colorful history. Alterman seduces his readers into an intelligent conversation about all the lies—the necessary lies, the white lies, the pathetic lies and the quite consequential lies. And by the end of the story he explains the media’s culpability in the rise of Trump and why this president’s lies are so very different from all the others. An absolutely compelling book for our troubled times.” —Kai Bird, Pulitzer Prize–winning author

Eric Alterman is a distinguished professor of English at the City University of New York Brooklyn College and holds a PhD in history from Stanford University. He is a columnist for The Nation magazine and the author of eleven books.