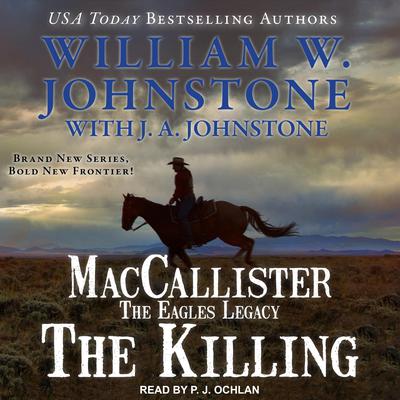 MacCallister: The Eagles Legacy: The Killing

By J. A. Johnstone  and William W. Johnstone
Read by P. J. Ochlan

From bestselling authors William W. Johnstone and J. A. Johnstone comes the blazing saga of Duff MacCallister, heir to a legacy of courage

Duff MacCallister fled the Scottish Highlands for a new world in Wyoming Territory. Betrothed to a good woman, Duff has the bad luck to be standing in the Chugwater Bank when a violent robbery explodes around him. With one man dead by Duff's gun, and another under arrest, a team of bandits swarms outside of town. As witnesses, Duff, a banker, and a beautiful barmaid are whisked into the town's hotel for safe-keeping as the outlaws threaten the defenseless town with a bloodbath if their fellow bandit isn't set free.

Except no MacCallister has ever run from trouble. With a scoped Creedmoor rifle he goes after the Taylor gang, one bad guy at a time . . . But Duff doesn't know that fate—and a little twist of frontier justice—will give the Taylor Gang one last chance for a shocking, treacherous act of revenge . . .