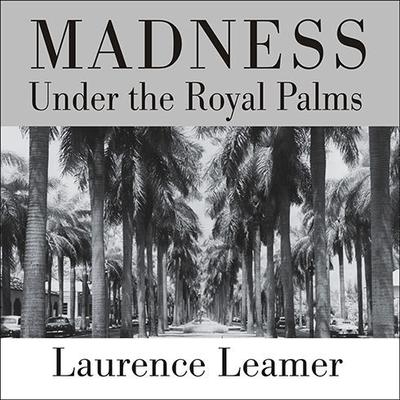 Madness Under the Royal Palms: Love and Death Behind the Gates of Palm Beach

In March 1999, a Palm Beach matron and her socially ambitious husband invited the elite of the island for a dinner dance honoring Prince Edward. Among those dancing to the string orchestra that evening would be those accused of murder and spousal abuse, and others who would suffer fates both unseemly and unspeakable. Among the outer circle there would be murders, suicides, and fatal fires. There would be those who would rise from the dust of obscurity to the heights of wealth and those who would fall to oblivion and disgrace. Thus begins Madness Under the Royal Palms. Leave it to Laurence Leamer, the bestselling author known for getting the inside story on his elusive subjects, to take us behind the walls of America's most exclusive enclave of wealth and privilege. Here Leamer tells a braided story involving a socialite determined to make it to the top of Palm Beach society, two infamous murders, and a powerful society reporter. As a backdrop, Leamer tells the story of the clash between old money and new, religion and status, and the love, lust, and fatal hatreds that determine the shape of a fiercely protected society. The cast of characters include trophy wives, trophy husbands, purported gigolos, glamorous widows, a pioneering gay couple, a wildly irreverent event planner, a sociopathic multimillionaire, and an elegant society queen. For 100 years, Palm Beach has been a fantasyland nurtured by, and maintained for, the megawealthy. In the end, Leamer's tale of money, murder, and mad pretension reveals a darker strain. Uncovering that strain, the author writes, "turned into as fascinating, in some cases as shocking, and always as unexpected a journey as I have ever taken."

Laurence Leamer is the author of over a dozen books, including The Kennedy Women and Fantastic: The Life of Arnold Schwarzenegger, with many bestsellers among them. He was on the staff at Newsweek and has written for the New York Times Magazine, Harper’s, Playboy, and many other publications. He lives in Palm Beach, Florida, and Washington, DC.