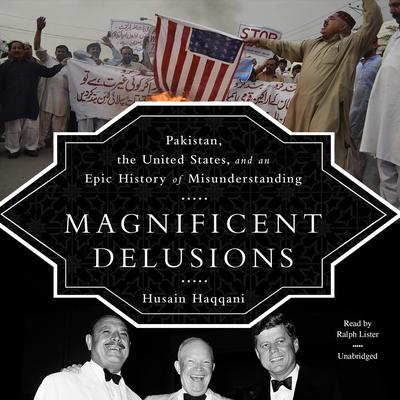 Magnificent Delusions: Pakistan, the United States, and an Epic History of Misunderstanding

A character-driven history that describes the bizarrely ill-suited alliance between America and Pakistan, written by a uniquely insightful participant: Pakistan's former ambassador to the US

The relationship between America and Pakistan is based on mutual incomprehension, and always has been. Pakistan—to American eyes—has gone from being a stabilizing friend to an essential military ally to a seedbed of terror. America—to Pakistani eyes—has been a guarantee of security, a coldly distant scold, an enthusiastic military supplier and ally, and now a threat to national security and a source of humiliation. In their sixty-five year relationship, one country has become a global superpower, the other perilously close to a failed state—perhaps one of the most dangerous places in the world.

Husain Haqqani has a unique insight into Pakistan, his homeland, and America, where he was the Pakistani ambassador and is now a professor at Boston University. His life has mapped the relationship of Pakistan and America, and he has found himself often close to the heart of it—sometimes in very confrontational circumstances, even under house arrest—which has allowed him to write the story of the two countries' turbulent affair, here memorably laid bare.

“This is a must-read book for anyone who seeks to understand geopolitics in the twenty-first century. Husain Haqqani provides a riveting insider’s account of the complex and critically important relationship between America and Pakistan. He knows both countries well, and his personal insights and objective analysis can help dispel the misunderstandings that are so dangerous.” —Walter Isaacson, New York Times bestselling author and CEO of the Aspen Institute
“Magnificent Delusions provides a fascinating insider’s account of America’s important but troubled relationship with Pakistan. Ambassador Haqqani’s purpose is not to fix blame but to explain how two countries that have for sixty years described themselves as allies can nevertheless misunderstand each other thoroughly and repeatedly. Richly detailed, this skillfully written narrative will enlighten scholars, entrance average readers, and give future diplomats much to contemplate. It is a timely, valuable, and objective book.” —Madeleine Albright
“[An] insightful, painful history of Pakistani-American relations…Demonstrating no mercy to either party, Haqqani admits that Pakistan verges on failed-state status but shows little patience with America’s persistently shortsighted, fruitless policies.” —Kirkus Reviews (starred review)
“Mistrust and cross-purposes characterize relations between Pakistan and the US, writes Haqqani, Pakistan’s ambassador to the US from 2008 to 2011 and now a Boston University professor, in this insightful if disturbing history…Haqqani concludes that military aid has undermined Pakistan’s democracy, converting it into a rentier state living off American money rather than its people’s productivity.” —Publishers Weekly
“Haqqani uses his wealth of personal experience to present a detailed account of the genesis and evolution of US-Pakistani relations over the last sixty years…A useful resource for academics, journalists, and policymakers at all levels.” —Library Journal

Husain Haqqani was Pakistan’s ambassador to the United States from 2008 to 2011. A trusted advisor of late Pakistani prime minister Benazir Bhutto, Ambassador Haqqani is a professor at Boston University and senior fellow and director for South and Central Asia at the Hudson Institute. He also coedits the journal Current Trends in Islamist Ideology. He has written for the Wall Street Journal, New York Times, Boston Globe, Financial Times, and others.