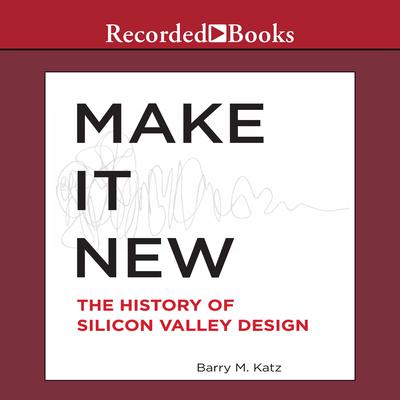 Make It New: The History of Silicon Valley Design

California’s Silicon Valley is home to the greatest concentration of designers in the world: corporate design offices at flagship technology companies and volunteers at nonprofit NGOs; global design consultancies and boutique studios; research laboratories and academic design programs. Together they form the interconnected network that is Silicon Valley. Apple products are famously “Designed in California,” but, as Barry Katz shows in this first-ever, extensively illustrated history, the role of design in Silicon Valley began decades before Steve Jobs and Steve Wozniak dreamed up Apple in a garage. Offering a thoroughly original view of the subject, Katz tells how design helped transform Silicon Valley into the most powerful engine of innovation in the world. From Hewlett-Packard and Ampex in the 1950s to Google and Facebook today, design has provided the bridge between research and development, art and engineering, technical performance and human behavior. Katz traces the origins of all of the leading consultancies—including IDEO, frog, and Lunar—and shows the process by which some of the world’s most influential companies came to place design at the center of their business strategies. At the same time, universities, foundations, and even governments have learned to apply “design thinking” to their missions. Drawing on unprecedented access to a vast array of primary sources and interviews with nearly every influential design leader—including Douglas Engelbart, Steve Jobs, and Don Norman—Katz reveals design to be the missing link in Silicon Valley’s ecosystem of innovation.

“Hear it from an endlessly awe-inspired expat: a place of unabashed, human-centered positivism, and old-school innovation within the vast and diverse ecosystem of design, Silicon Valley is a testament to the enduring greatness of American applied creativity. Barry Katz’s history is a delight for experts and accidental readers alike, as it touches upon so many icons and necessary fixtures of everyday life.” —Paola Antonelli, director of Research & Development at the Museum of Modern Art

Barry M. Katz is professor of industrial and interaction design at California College of the Arts, consulting professor in the design group at Stanford University, and fellow at IDEO, Inc. He is coauthor of Change by Design, with Tim Brown, and NONOBJECT, with Branko Lukić (MIT Press).