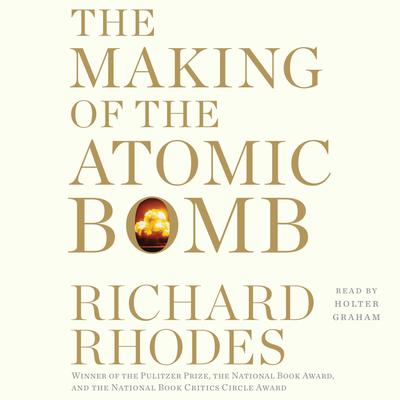 The Making of the Atomic Bomb: 25th Anniversary Edition

Winner of the 1988 Pulitzer Prize for General Nonfiction

Here for the first time, in rich, human, political, and scientific detail, is the complete story of how the bomb was developed, from the turn-of-the-century discovery of the vast energy locked inside the atom to the dropping of the first bombs on Japan.

Few great discoveries have evolved so swiftly — or have been so misunderstood. From the theoretical discussions of nuclear energy to the bright glare of Trinity there was a span of hardly more than twenty-five years. What began as merely an interesting speculative problem in physics grew into the Manhattan Project, and then into the Bomb with frightening rapidity, while scientists known only to their peers—Szilard, Teller, Oppenheimer, Bohr, Meitner, Fermi, Lawrence, and yon Neumann—stepped from their ivory towers into the limelight.

Richard Rhodes takes us on that journey step by step, minute by minute, and gives us the definitive story of man’s most awesome discovery and invention. The Making of the Atomic Bomb has been compared in its sweep and importance to William L. Shirer’s The Rise and Fall of the Third Reich. It is at once a narrative tour de force and a document as powerful as its subject.

“A stirring intellectual adventure, and a clear, fast-paced, and indispensable history of events on which our future depends.” —Carl Sagan

Richard Rhodes is the author of numerous books and the winner of the Pulitzer Prize, National Book Award, and National Book Critics Circle Award. He graduated from Yale and received fellowships from the Ford Foundation, National Endowment for the Arts, John Simon Guggenheim Memorial Foundation, and Alfred P. Sloan Foundation.