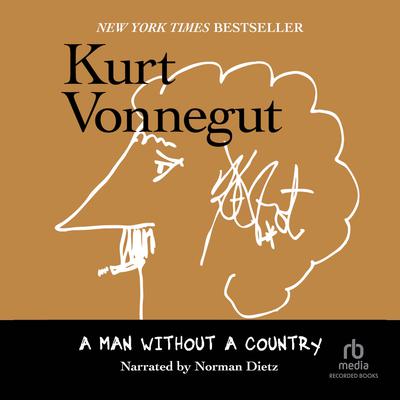 Man Without a Country

One of the greatest minds in American writing, Kurt Vonnegut has left an indelible impression on literature with such inventive novels as Cat's Cradle, Slaughterhouse- Five and Breakfast of Champions. Now this iconic figure shares his often hilarious and always insightful reflections on America, art, politics and life in general. No matter the subject, Vonnegut will have you considering perspectives you may never have regarded. On the creative process: "If you want to really hurt your parents . the least you can do is go into the arts. I'm not kidding." On politics: "No, I am not going to run for President, although I do know that a sentence, if it is to be complete, must have both a subject and a verb." On nature: "Evolution is so creative. That's how we got giraffes." On modern cultural attitudes: "Do you think Arabs are dumb? They gave us our numbers. Try doing long division with Roman numerals." And on the fate of humankind: "The good Earth-we could have saved it, but we were too damn cheap and lazy." A Man without a Country showcases Vonnegut at his wittiest, most acerbic, and most concerned. Beyond the humor and biting satire is an appeal to all readers to give careful thought to the world around them and the people they share it with.

“Like his literary ancestor Mark Twain, [Kurt Vonnegut’s] crankiness is good-humored and sharp-witted…[Reading A Man Without a Country is] like sitting down on the couch for a long chat with an old friend.” —New York Times Book Review
“Filled with [Vonnegut’s] usual contradictory mix of joy and sorrow, hope and despair, humor and gravity.” —Chicago Tribune